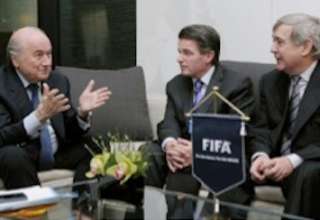 A Canadian Soccer Association delegation has delivered the bid book for the 2015 Women’s World Cup to FIFA headquarters in Zurich.

Zimbabwe is competing with Canada for the right to win the 2015 WWC. Zimbabwe, ranked outside of the top 100 in the world in women’s soccer, is hoping that an emotional bid can triumph. Zimbabwe has been pushing an agenda that includes the promotion of the women’s game in Africa.

But the bid book submitted by the CSA isn’t available to the public.

As well, no cities are outlined in the bid, so we don’t yet have an answer on how a Toronto venue would juggle the Pan Am Games and the Women’s World Cup, which would be held concurrently.

“We have not announced cities. Per timeline, first we will have to win the bid … then it will be done jointly with FIFA to announce cities,” wrote CSA spokesman Richard Scott in an e-mail.

In fact, FIFA would likely have a hand in deciding which Canadian cities would make the final cut, if the CSA’s bid is successful.

FIFA will decide on the winning bid on March 3. It will be vital for the Canadian Soccer Association to have a deal with the women’s national team by then. The team is threatening a boycott of international matches until the CSA comes to an agreement that would keep Carolina Morace as the coach of the national team after the 2011 WWC. Morace had pledged to quit after the tournament over what she feels is a lack of support and commitment from the CSA for her and the women’s program. The team is now promising a boycott unless the Morace situation is resolved. Ironically, Canada’s next competitive match is set for March 2, a day before the FIFA announcement. Canada is set to face Scotland in the Cyprus Cup.

““The FIFA Women’s World Cup 2015 will play an important role in the development of young Canadian athletes for podium success on the international stage. It will provide Canada’s athletes with valuable international level training and competition experience at home,” said Lunn in a release from the CSA.

Canada estimates that the 2007 U-20 World Cup brought $259 million worth of revenue to the country.