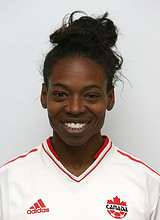 If the dispute between women’s national team coach Carolina Morace and the Canadian Soccer Association ends up in front of an arbitrator, it wouldn’t be the first time the women’s program’s dirty laundry would be aired with lawyers present.

According to a CP report, the members of the women’s team plan to boycott upcoming international matches unless the CSA and Morace, who is unhappy about funding and lack of control over the women’s program, can come to an agreement that would allow her to stay.

But even more deflating is the news that the Canadian women are pursuing legal help in their quest for better compensation. But the players have indicated that they would play if the Morace situation was resolved, and let the compensation issue go to arbitration.

In 2006, Canadian national-team members Charmaine Hooper (at that time the women’s all time scoring leader), Sharolta Nonen and Christine Latham took then-coach Even Pellerud and the CSA to the Sport Dispute Resolution Centre of Canada. At the hearing, serious cracks in the team were revealed to the public.

The three plaintiffs — who lost their case in June, 2007 — contended that the CSA was trying to force all of its national-team women to play for the Vancouver Whitecaps, and that they were threatened to be tossed from the program if they didn’t follow suit. They claimed that the CSA was beholden to Whitecaps owner Greg Kerfoot. In the hearing, it was revealed that “Pellerud and his wife rent and live in a large home in West Vancouver owned by Greg Kerfoot.”

It was dirty, nasty business. The tribunal found that the plaintiffs’ testimonies were inconsistent, and did not agree that Pellerud renting his home from Kerfoot was a conflict of interest.

Latham admitted that she talked to several of her women’s teammates, including floating the idea of — ahem — boycotting games to pressure Pellerud’s job.

“We are a team. We agreed to stayed together and stick to what we had decided as a team,” Latham wrote in an e-mail to her teammates. “If we are going to get what is fair, and secure the future for the players that will come after us, we must stay together 100%. This isn’t about individual players. This is about the Canadian Women’s National Team and getting the respect we deserve from our Federation and Even. I hope everyone is doing well.”

Christine Sinclair, at the time Canada’s rising star testified on behalf of Pellerud. So did current national-team midfielder Diana Matheson.

It was an ugly court battle that pitted player against player. And, after the court case, the women’s team’s form plummeted, a downward spiral that was only corrected when Morace was brought in to coach the team.

And while a new legal battle wouldn’t necessarily pit players against players like the last go-round, the long-term effects could be quite similar to what we saw back in 2006.

Even more troubling would be the fact that twice within five years would the women be heading to an arbitrator to resolve internal problems within the program.