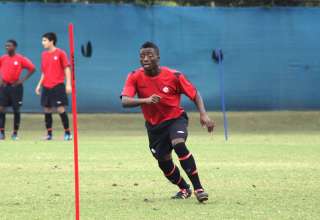 The Canadians looked to be set for a nervy finish to their final group-stage match at the CONCACAF U-17 Championships.

Canada went into its final group-stage match Wednesday knowing that all it had to do was not lose to Costa Rica by two goals or more. Do that and the Canadian U-17s would win Group B and get a spot in the elimination rounds. But, after 75 minutes, Canada found itself down 1-0, and had seen another Costa Rican effort strike the woodwork.

And that’s when Hanson Boakai, the teenager who is set to become the NASL’s youngest player, unleashed a wonder strike that put Canada in the safe zone. The FC Edmonton midfielder showed us all why his club’s brain trust deemed him ready for a move to the pros and promoted him to the senior side, even though the midfielder is just 16 years of age. Final score, 1-1. We could all exhale.

Out of nothing, he scored maybe the goal of the tournament so far. Cutting off the right wing, he came across the top corner of the box, then unleashed a curler of a left-footed shot that swung back towards the near post and in.

The goal sent a dagger through the Costa Ricans, who needed a two-goal win to survive.

As someone who spends an, ahem, fair bit of time around FC Edmonton, I hear a lot of whispers about just how good this kid can be. Senior players have wondered out loud at how a kid can be so composed on the ball at just 16 years of age.

Now, through the first two matches of the U-17 Championship, as the maestro of the Canadian attack, the rest of the country is getting to see what the Edmonton soccer community has known about for a little while — that there’s a very special young player in our midst.

The Boakai strike settled down a Canadian side that didn’t look solid for the majority of the match. Jordan Medina, the Costa Rican left back and easily that country’s best U-17 player, smashed a first-half attempt off the post.

And, in the second half, Costa Rican striker Arington Alexander Torres split the defensive pairing of Ian Fernandes and Alex Comsia, then lobbed a shot over keeper Marco Carducci to give the Ticos the lead.

Comsia also had a headed effort that went into the Costa Rican net at the end of the first half ruled out for offside.

So many times before, when Canada is put in positions of adversity on Central American soil, we have seen various national sides fail to meet the challenges. And, for long periods of this match in Panama, there were nerves.

Until Boakai introduced himself to the country, that is.