November 26, 2022
9 New Articles
Home NASL & USL FC Edmonton Ben Fisk on his training stint with FC Edmonton: “We’ll see how the club likes me and we’ll go from there” 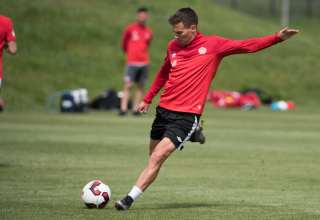 “We’re having a look at Fisky at the moment,” said FC Edmonton coach Colin Miller, who knows the player well from their time together at the Whitecaps. “I just want to see him for a few days and take it from there.”

Fisk has spent the last two years playing in Spain, with Coruxo and then Deportivo La Coruna’s B side. He is currently a free agent. He was recently in Canada’s U-23 camp and has played for Canada’s U-20 side three years ago.

“We wanted to have a look at him, but nothing has been finalized yet,” said Miller. “Maybe later on today or over the next couple of days it will be. But, we’re excited, because if we do come to a deal, he’s Canadian, which is fantastic, we may get accused now and then of not signing Canadians, but they have to be ready for our level as well. Fisky, I believe, has a good enough pedigree coming through the Whitecaps Residency. And, he’s now spent some time in Europe. If he signs with us, I think he’ll be a very strong addition to the group.”

Miller said FCE made two other contract offers to other Canadian players but those didn’t pan out. He said one new addition has been signed, but that won’t be announced until that player gets to Edmonton. A contract offer is out for another player and FCE is waiting on the answer.
Miller said that Fisk can be used either on the left or the right side or as a No. 10.

“I know Colin from my days with the Whitecaps,” said Fisk. “I was waiting at home, looking for something in Europe, but he gave me a call and asked me if I wanted to come out and train for a few days, so I’m here trying it out and we’ll see how things go.

“We’ll see how the club likes me and we’ll go from there.”

But Fisk’s first impressions were positive.

If Fisk were to stay in Edmonton, it would be a high-profile Canadian signing for the Eddies, and yet another Canadian of note who would choose to play in NASL, joining the likes of Nik Ledgerwood, Julian de Guzman, Nana Attakora and Maxim Tissot.

“I’ve never had a bad perception of the league,” said Fisk. “For me it’s always been a quality league and I know a lot of the guys playing in it. It doesn’t change things from a quality perspective; I think it’s great to see some familiar faces in the teams here and, training here, it’s nice to have a few guys I know, so I can get into the team and feel at home a bit quicker.”

Whether Fisk signs or not, FCE will have some lineup problems for Saturday’s game at the Indy Eleven. Both starting centre backs will be out. Pape Diakite will be suspended after being sent off Sunday against Ottawa, while Albert Watson had to return home to Belfast after his father passed away. This means that Karsten Smith, who signed on Sunday and then played a half-hour in the win over Ottawa, will be thrust right into the thick of it against an Indy team that lost for the first time this season this past weekend.