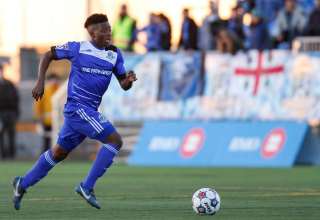 Not so fast, says his former club.

FC Edmonton coach Colin Miller said nothing has been discussed between the two clubs in regards to compensation that the Eddies claim is owed to them.

“They can’t do anything until they look after us,” said Miller.

Boakai’s contract with FC Edmonton expired after the 2015 season. He then went to Croatia to try his luck, but what’s been a sticking point is Edmonton’s claim for compensation. He then moved on to Sweden and, on July 11, Landskrona BoIS announced his signing (CLICK HERE) even though, according to the Eddies, there had been no contact between the clubs over the outstanding issues.
Boakai made his FC Edmonton debut in 2013, as a 16-year-old. According to FIFA regulations, a club must be compensated if a professional under the age of 23 moves between clubs of two different national associations — and this is key — “whether during or at the end of his contract.” So, even though Boakai was no longer under contract with FCE, because Boakai is moving from Canada to Sweden, the Eddies will claim that they are owed compensation fees by Landskrona BoIS — and that Boakai is not eligible to play for his new Swedish club until that deal is done.

Landskrona BoIS says that Boakai is under contract until November, 2017.

The Canadian Soccer Association stated that, without going into the specifics of any one case, any claim by a Canadian club on a team from outside this country “would be reviewed by the FIFA player status committee. As the Canadian FA, our role would be to monitor and provide advice to our member as required.”