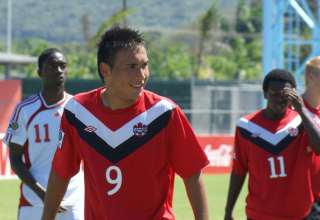 Sadi Jalali will move right into FC Edmonton’s first team, even though he’s younger than many of the players in the club’s reserve side.

Jalali, who was with the Canadian team at 2011’s U-17 World Cup, tweeted Monday that he had signed a pro deal with his hometown Eddies, which was later confirmed by the club.

“It’s really exciting for me,” said Jalali, who also trained with the youth wing of German side, Kaiserslautern, last year. “There are not a lot of 17-year-olds who can say they have moved onto a first team right away.”

In late 2011, Jalali came to FCE, his hometown club, as he waited for his paperwork to clear so he could go to Kaiserslautern. His agent came to a handshake deal with the Eddies; if Jalali didn’t stick in Europe, Edmonton would get his North American rights. But, with no signature and nothing official in their hands, the members of FCE’s front office could only watch when Jalali went to the Whitecaps’ Residency after coming back from Germany.

But, last fall, Jalali returned home to Edmonton to rejoin the Eddies — and now has a shot at first-team football in the NASL. In Monday’s intrasquad game at Commonwealth Fieldhouse — which featured reservess and FCE senior players Shaun Saiko, Neil Hlavaty, Wes Knight and Antonio Rago — Jalali showed excellent movement off the ball and scored on a shot from outside the box which saw him turn and shoot in one quick, fluid motion.

“I hope to have a couple of strong years here at home,” said Jalali, who scored against England in the U-17 World Cup. “After having a couple of good years here, I hope to get sold to another club, to move on to have a shot at MLS or a club in Europe.”

Jalali said his stint with Kaiserslautern gave him a lot of confidence. But, because he had yet to reach his 18th birthday and didn’t have an EU passport — something which helps so many other Canadians looking for work in Europe — staying in the academy in Germany would have been complicated. He might have had to regularly return to Canada in order to remain eligible.

“Being there gave me a lot of confidence, to be a top player at that academy. The coach there said I could help the team a lot at the U-19 level. But I wasn’t 18, so it’s not an easy process. I don’t have family in Germany, and I couldn’t stay in the country.”

Now, Jalali is looking forward to renewing his friendship with U-17 (and Vancouver Whitecap) Bryce Alderson. The Whitecaps and Eddies are set to meet in the semifinal round of the Amway Canadian Championship.

“I talk a lot to Bryce Alderson, and I know he likes it a lot in Vancouver. Hopefully we’ll get a chance to play against each other in Amway Canadian Championship. I would love to play and be able to score a goal or two against Vancouver.”