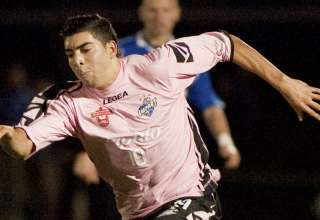 Reda Agourram’s dream to crack the Montreal Impact roster is over.

The Impact announced Tuesday that four of the five Canadian-eligible players invited to MLS camp from last year’s NASL roster will be staying with the club as the team moves camp to California. Eduardo Sebrango, Mircea Ilcu, Simon Gatti and former captain Nevio Pizzolitto are safe. Agourram is not.

Yes, the announcement was made with the same kind of feel as a reality show. But Agourram’s name simply wasn’t mentioned. Agourram’s progress with the Impact was, well, impacted by a series of groin problems. He only played seven games last season. He wasn’t able to work out with the club during its October evaluation camp. The Morocco-born forward, though, told The 11’s Mike Wyman before the start of MLS camp that his injury woes were behind him.

“Since the season ended I’ve been working in physio to heal it and strengthen the muscles,” he said. “The Impact reserve team began working out on January 2nd. I’ve joined them since then and until now everything’s good. I’m glad it’s behind me.”

Agourram is a former three-time Quebec Elite Soccer Player of the Year.