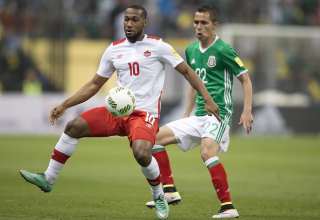 When the CONCACAF World Cup qualifying groups were revealed, we all agreed that Canada’s mission was simple; to qualify for the Hex, the men’s national team didn’t have to finish ahead of Mexico — that would be unrealistic. It only needed to be better than Honduras and El Salvador.

Canadian national-team coach Benito Floro, said the same thing — that Mexico would be off in its own world, and it was basically a three-team race for second place.

So, after Tuesday’s 2-0 loss to Mexico at Azteca, Canada now has four points from four of six games played. That’s the same point total as Honduras, and two up on El Salvador. Honduras holds a massive advantage in goal difference.

But this is all that matters: With games left against El Salvador (home) and Honduras (away), Canada still controls its own destiny. At the start of this group stage, we would have taken this scenario. Gladly. Two games left, and all to play for — with no games left against Mexico.

Honduras and El Salvador each have one game each left against the Mexicans. Worried that the Mexicans, who have already wrapped up top spot in Group A, will take it easy for those matches? Remember this: Mexico’s rivalries with their Central American neighbours are super-heated. They hate El Salvador. They hate Honduras. And nothing would give the Mexicans more pleasure than to finish the group a perfect 6-0-0 and end Honduras’s and El Salvador’s World Cup dreams in the process. So, put the two losses to Mexico out of your mind. Canada is still where it needs to be. If the Canadians don’t make it to the Hex, it was because they didn’t take care of what they needed to do in the final two games. Forget about the 8-1 last time they were in Honduras. They need results and, if they get them, they won’t need to scoreboard watch. No more excuses.

Actually, if Mexico does indeed to continue to flex its muscles, there’s a chance that Canada could eke out draws in its final two games and still reach the Hex.

At both BC Place and Azteca, Mexico proved that their skill level is far beyond Canada’s reach. But we knew this, didn’t we? Heck, at Azteca, Mexican coach Juan Carlos Osorio didn’t give starts to either Hirving Lozano and Javier Hernandez, who each scored in Friday’s 3-0 win in Vancouver. He has so many weapons at his disposal, he could afford to rotate the squad.

Canadian national-team coach Benito Floro brought in Nik Ledgerwood to replace Tosaint Ricketts on the right side, while Manjrekar James came in for Adam Straith at centre back. James ended up arguably being Canada’s best player on the night, a steadying influence in the back. Canada’s shape was better in Azteca than it was in BC Place.

But, at Azteca, having discipline and decent shape simply isn’t enough. There’s a massive talent gap to bridge. Yet, if Canada plays in Honduras like it did in Mexico, a 0-0 isn’t out of the question.

Marco Fabian, though he didn’t score, was the man who brought misery to Canada. In the 16th minute, he got goal side of Canadian right back Doneil Henry, felt a nudge, and went down to the ground — drawing a penalty that Andres Guardado converted. Now, before any debate about soft CONCACAF penalties is begun, it has to be noted that Fabian only went down after he put the ball into the middle of the Canadian penalty area. The ball went into the net on the next touch. So, had the penalty not been awarded, Mexico’s goal out of open play would have stood. No matter which way you look at it, 1-0 to Mexico was a fair outcome.

Later in the first half, Fabian blistered a shot at keeper Milan Borjan’s hands. After making the stop, Borjan kicked the ball into touch and immediately signalled to the bench that he needed to come off. His hand was injured on the play, and he couldn’t put his keeper glove back on.

Before the first half ended, sub keeper Kenny Stamatopoulos had to fetch the ball out of the back his net. Jesus Corona scored an absolute peach of a goal; it started with a spin move at the top of the box that befuddled veteran Canadian midfielder Atiba Hutchinson, and finished with a perfect shot into the bottom corner of the goal.

Mexico took the foot off the gas in what was an uneventful second half. And that’s what should give Canadians hope. In two second halves this week, Mexico showed Canada the quality of mercy. And this might give us an indication that they might want to give us a hand when it comes to getting rid of Honduras and El Salvador.

I mean, you’ve got to look for every positive you can, right?