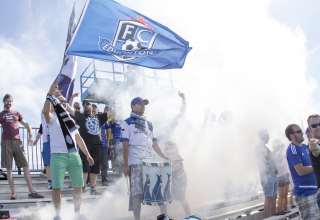 It hasn’t been like this for FC Edmonton. In past seasons, the fall-season script has gone like this: Try to get back into the chase for a post-season spot, and fall just short.

But it’s so different this season, as the team looks to make the playoffs for only the second time in club history. The Eddies are tied with spring-season champ Indy Eleven atop the fall-season standings. The Eddies are just a point behind Indy in the overall standings.

This is key, though: The Eddies have a game in hand on Indy, as well as the New York Cosmos, also in the three-team chase for the top of the NASL fall-season and overall standings. And, the Eddies have only one game each left against Indy and the Cosmos. Those two still have to play each other twice.

So, based on points-per-game, based on the schedule, you’d have to make FCE a slight favourite over the Cosmos and Indy to take the top seed. Emphasis on “slight.”

But the Eddies know that, going into this weekend’s match on the road to the Tampa Bay Rowdies, that this fall season isn’t like the ones that have come before. It’s about building a lead over their rivals, not playing catch-up.

“We’re well aware of that; it’s a different type of pressure,” said FCE coach Colin Miller. “From being at the bottom of the league and trying to, where everywhere else in the world you fight against relegation, you fight for survival — but now it’s a different kind of pressure. Can we keep this going? We’re fearful of no one, but respectful of everyone… This mindset we have amongst our players, we’re only looking up the way.”

Being in a spot where you don’t, for the moment, need help from other teams — it’s a good place to be in. Edmonton goes to Tampa Bay not having to worry what Indy or the Cosmos or any other team does. The Eddies know if they keep getting results, they’ll be in the post-season. And if they keep on this torrid fall-season pace — 6-1-1 through eight games — they know that in November they’ll be hosting rather frosty post-season matches at Clarke Field.

“It’s a great pressure to have. You’re not worried about anyone else. You’re only worried about your own squad of players and how you approach the game. And we’ve been very positive in every game — we’ve told the lads that when we go to Tampa, we don’t want the line dropping, the defence dropping too deep. We want to be as brave as we can away from home.”

With the team only having lost one of its eight fall-season games — an away match in Indy that saw FCE without both of its regular starting centre backs — Miller hasn’t had to make too many changes. In fact, an unchanged starting XI has been a regular sight.

But that may need to change in a couple of weeks. After the August 28 game at home to Puerto Rico, it’s expected that Nik Ledgerwood will have to leave to join the Canadian national side for its two early September crucial World Cup qualifiers. The Canadian Soccer Association hasn’t confirmed a call, but the Eddies are bracing to lose Ledgerwood for a week.