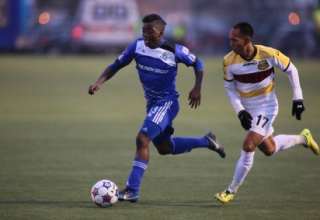 Canadian national-team coach Benito Floro is going to give wunderkind Hanson Boakai the chance to play with the big boys.

Boakai won’t celebrate his 18th birthday till later in October, but he will be joining the Canadian national team for its friendly against Colombia at New Jersey’s Red Bull Arena on Oct. 14.

Boakai becomes the first playing member of FC Edmonton to be called up to the senior national side. The call-up comes just days after reports surfaced that the U.S. national team is set to summon Minnesota United’s Miguel Ibarra for its next camp. Ibarra was just named the NASL player of the month for September.

Boakai was an integral part of Canada’s squad at the most recent U-17 World Cup; he’s already working ahead of his age group, as he’s in the mix for the current U-20 Canadian squad.

Canadian soccer fans had the chance to really see what Boakai could do in the Amway Canadian Championship semifinal series against the Montreal Impact. While the Impact took a thrilling, down-to-the-wire tie, there was little doubt that Boakai was the best player on the field over the course of their two games.

The Eddies have brought along Boakai slowly — but Miller said it’s all part of the player’s learning curve.

“We have been quite hard on him,” said Miller. “He’s been fined a couple of times, we we all know that he was once late for a game. But, never, at any point, has anyone lost faith in his ability.”

Miller and his assistant coach, Jeff Paulus, understand how big the call-up is in terms of the NASL being scouted and recognized as a source for national-team talent.

“We have definitely been talking about it. We have seen players called up by Honduras, by El Salvador. I think it shows the strength of our clubs in this league; we have so many teams battling for post-season positions.”