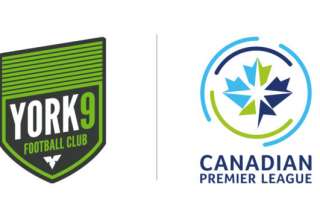 And so it begins.

York 9 is the first set-to-start-in-2019 Canadian Premier League club that has publicly revealed its name and logo. The primary colour is electric green, which we are told is meant to represent the lush forests of the regions north of Toronto, and not the GO Trains that carry thousands of commuters back and forth between York and the city every day.

(My first thought was GO Train green, by the way. My bad).

Last week, Canadian Premier League commissioner David Clanachan announced that, once a week over the next six to seven weeks, the CanPL clubs would be revealing their identities. And, in Vaughan, Ont. Thursday afternoon,  former national-teamer and Toronto FC Day-One player Jim Brennan, the director of soccer for York9, was on hand to show off the new colours. Also in the VIP group are Greenpark CEO Carlo Baldasarra and Preben Ganzhorn, the CEO of the newly minted York Sports and Entertainment group.

Brennan can boast that he was in on the ground floor with both TFC and, now, the first officially announced CanPL club, though a second one, as per Clanachan’s schedule, is on tap for next week. Hamilton, Winnipeg, Port City, Calgary and Halifax are other CanPL cities whose clubs have received sanctions from Canada Soccer. As well, FC Edmonton is looking to push towards the CanPL, and already have an existing pro sanction from its NASL days. The Ottawa Fury currently plays in USL.

The team will begin play at York University, which offers connections to those throughout the GTA via the expanded subway line.  The new Pioneer Village stop is only a couple of blocks away from the facility. The plan is to eventually move into a new soccer stadium that will be built in the York region.

The irony is that Toronto FC and the Argos had originally targeted York as the target for a shared stadium; that deal fell apart, leading to the decision to build a soccer stadium on Toronto’s Canadian National Exhibition grounds. And, now, BMO Field also has the Argos as a tenant, too.

“We are thrilled to welcome York 9 FC to the Canadian Premier League and give this region’s passionate sports fans a club of their own,” Clanachan said in a release. “The initial support for the CPL in York has been overwhelming. Having the involvement of local business leaders like the Baldassarra family, who have greatly helped to develop and build this region, will help ensure York 9 FC becomes an integral part of the region’s cultural landscape.”

“I have spent my whole life in here, the time is right for York Region to develop its own identity,” said Brennan. “This is a booming area that is diverse, youthful, and passionate about football. It is our goal to ensure that when York 9 FC steps on to the pitch, it will reflect what our community is all about.”