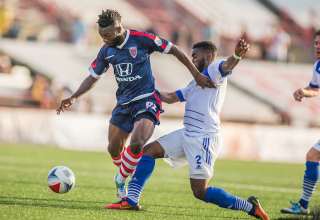 FC Edmonton has found some rather, shall we say, unique ways to pull points out of the fire so far this season. There was Gustavo’s 25-yard injury-time rocket to save a point at Rayo OKC; last week, the Eddies found a way to get a late winner against Ottawa despite being down to 10 men.

But, had keeper Matt VanOekel’s last-gasp header found the Indy Eleven’s net on Saturday, it would have set a new standard. With the shorthanded Eddies trailing 1-0 thanks to a Greg Janicki goal, MVO joined the attack in the 93rd minute. Adam Eckersley’s corner found Van Oekel’s head, and the keeper sent the ball goalward where it, it, it…

Was cleared off the line by Indy’s Brad Ring. And, just seconds later, the whistle was blown for full time.

“It was a good delivery and the big man attacked the ball really well,” said Eddie coach Colin Miller. “And he made a couple of very good saves, as well.”

It was only the Eddies second loss in 10 games. But, you might have figured that this one was gonna be a problem for FCE. The Eleven, of course, is the spring-season champion and only lost its first NASL match of 2016 last week. FCE only had three outfield players available as subs. And, the Eddies were without both starting central defenders — Pape Diakite was suspended after being sent off last week against Ottawa, and Albert Watson had to deal with a family emergency back in Northern Ireland. So, Karsten Smith, signed last week, and fullback Shawn Nicklaw were placed into those starting CB roles.

And they were caught in the 13th minute; Janicki was left wide open in the box to head home a free kick from Dylan Mares.

But, interestingly enough, Indy won this game in the fashion that Eddies usually have their success. The Eddies dominated possession (the visitors had 58 per cent of the ball), but Indy’s bend-but-don’t break defence didn’t allow too many quality chances. And, Indy waited and got their chances on the break, using speed to break back on Edmonton.

“We’ll play a lot worse than we did tonight and win,” said Miller. “We’ve come into one of the stingiest places in the league and our players have nothing to be embarrassed about.”

Really, the Eddies should have created more good scoring opportunities from the possession that they enjoyed; but final ball was lacking. Jake Keegan had two great first-half opportunities, but fired one just over the bar and scuffed the shot on the second, allowing Indy keeper Jon Busch to make an easy save.

On the counter, Indy created some excellent opportunities. VanOekel was in the right spot at the right time to catch a headed effort from Omar Gordon, and then made a sensational leaping stop to deny Eamon Zayed.

Mares, who was Indy’s best player on the night, had a great second-half chance that was deflected just wide.

But, in hot, humid temperatures — water breaks were given to the players in the first and second halves — the Eddies couldn’t find an equalizer, despite all the possession.

ROSTER NOTES: Miller said signs are very positive for Canadian Ben Fisk, who started training with the Eddies last week. But a deal is not yet finalized. Two other players have been signed; one has arrived in Edmonton and should train with the Eddies early this coming week; another is expected to arrive soon. Both are awaiting clearances of their International Transfer Certificates.

As well, Watson is expected to return to Edmonton in time to be available for Wednesday’s match against the New York Cosmos — and Diakite’s suspension will have been served. But Miller admitted that Karsten Smith has played so well, he’s got a bit of a selection headache.