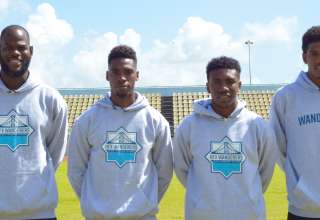 No, not that Elton John. That other one supports Watford.

Wanderers coach Stephen Hart managed Trinidad and Tobago’s national side after he coached the Canadian national team. His assistant in Halifax, Derek King, previously worked with T&T’s under-20s. Hart said he went back to the Caribbean to look at these players — but they certainly weren’t strangers to him.

Williams played for Hungarian giants (well, it used to be a giant club, at least) Ferencvaros for four years. He was signed by Sheffield United but was sent to Budapest because of issues with working papers in the U.K. He was paired with Canadian keeper Wojtek Zarzycki for part of his career with Fradi.

“He was one of my captains at the senior team… He is going to be a good part of the dressing room, as he is quite a character,” said Hart. “That’s one thing that’s missing in the game now, players who keep things lively.”

Hart said that while the dressing room remains a “sacred place,” they don’t offer the respite for players that they used to. They’re more businesslike now, and he believes that players need to know there’s a place they can go to simply be themselves.

He said that Garcia was impressive with T&T’s U-20s and was knocking at the door of the senior team.

John is not a player Hart coached at T&T. He said he was impressed by the player, but he had just moved to Belgium — and he didn’t want to recall a player who was trying to get settled in a European league so he would be a depth guy on the national side.

“He’s very composed on the ball and he’s a good tackler.”

He’s also seen King shifted to centre back at Central FC in Trinidad and Tobago.

Hart said he has more signings that still have to be announced, but is still looking for positions to fill.

“I want to have two players for every position, then blend in the younger talent.”

Garcia, a teenage fullback, impressed the coaches at the CanPL’s open trials in Montreal. He had previously spent time in the Montreal Impact’s academy system.

Ohin, a Ghanaian, has spent the previous three seasons with WSA Winnipeg of the PDL.

“Raphael has been consistently the top performer for the WSA Winnipeg franchise for the last few seasons,” said Valour FC coach Rob Gale in a release. “It’s a great addition for us he’s a terrific character and this will be a great challenge for him to progress into full-time professional soccer.”

Forge FC announced that the club has inked former Canadian U-20 Tristan Borges. He most recently played with the U-21 side of Dutch club, Heerenveen.

“Tristan is a dynamic midfielder who brings an exciting dimension to our attack through his creativity, versatility and ability to attack the goal,” said Bobby Smyrniotis, Technical Director and Head Coach of Forge FC, in a release issued by the club. “This, coupled with his international experience for club and country, make him a valuable addition to our team.”