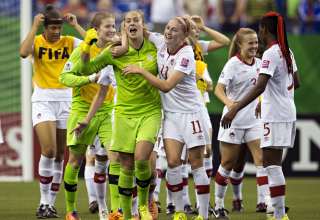 At this time last year, Janine Beckie was looking forward to the U-20 Women’s World Cup, as a member of the U.S. national program. But, now, she’s a big part of Canada’s U-20 side, and scored the winning goal against North Korea that put her team into Saturday’s quarter-final match against Germany.

The sister of Ottawa Fury defender Drew Beckie, Janine was born in Saskatchewan but moved to Colorado with her family when she was very young. She has scored 26 goals in 45 NCAA matches for Texas Tech. Her brother played for Canada at the qualifying tournament for the 2012 Olympics — and most of their extended family is still in Saskatchewan.

After Beckie arrived in Edmonton with the U-20 team, we sat down for a one-on-one interview. Canada plays Germany this Saturday at Commonwealth Stadium.

What went through your mind after you scored against North Korea?
It was obviously great to get the goal, but, in my mind, I was thinking ‘let’s keep the lead’ and ‘let’s go for another one to win this game.’ There were thousands of things running through my mind, but the biggest was let’s hold on and come out of this game with a win.

Looking forward to Saturday’s game in Edmonton, do you have a lot of family coming out from Saskatchewan?
I do, actually. Quite a bit of cousins and aunts and uncles. My mom is going to come up from the States. It’ll be good to have a big cheering section. Saskatoon, Kenaston, Regina, all of those places.

How quickly did you fit into the Canadian team after making the decision to join the program?
It was a great move. I just felt like I wanted to try this out and see what the better fit was for me. I felt like, up here, my role was a bit bigger. I just fit in better. I knew that within the first camp where I was here, talking to Andrew (coach Andrew Olivieri) about it all. Obviously, it’s a tough switch. The American program was great to me. I have nothing bad to say about the way that they run their programs. But I just fit in better here and I feel very happy with my decision.

How much input did Drew have in your decision to play for Canada?
He’s the brother that leaves me to make my own decisions. He was like, ‘I want to support whatever decision that you make. You’re good enough to play on both teams.’ But he really didn’t have too much input. He was very excited once I made my decision, but he kind of let me make the decision on my own.

The Germans can score goals in bunches (12 in three group-stage games, including a win over the Americans). You know there will be pressure on the forwards to score.
We have been able to look at them quite a bit, through the games that they have played already. They are a very impressive team, very organized, and it will take our defence to be organized to beat them. But, to us, it’s just another game, another team that we can beat, that we can compete with. To us, there’s no team too big, too small, to play against. We’re really excited to be out there and show what the Canadian team is all about.

It feels like you had two separate group stages. You lose to Ghana, don’t score in first half against Finland. Then you turn it on for three goals in the second half of the Finland game, and beat North Korea. Was it nerves that led to the slow start?
Against Ghana, that’s the first game, we have to get our nerves out of the way. We’re playing in front of a big crowd, in our home country, so I think everyone was very nervous. It showed, definitely in the first half of the Ghana game. But we pulled it together, we learned from it, but then we came out the same way against Finland. It took them to score two goals to get us going, which is something we can’t let happen against Germany. But, when we do turn it on, we are fantastic. And we can produce results.

You’re playing in a massive stadium. You’ve probably heard talk about what happened here in 2002 (when nearly 48,000 showed up at Commonwealth for the U-19 final between Canada and the U.S.).
We have had no idea what kind of numbers will show up at the stadiums. It was crazy how many people showed up in Toronto. Obviously, in Montreal, the Olympic Stadium is huge, but we still had 13,000 people at that game, which is unbelievable. This stadium has history with Canadian soccer so I am looking forward to a big crowd and another rowdy section of supporters.

When you know people are taking their vacation time to travel to watch you play, what does that mean?
It’s so special, it means the world to us that we have that support. It helps us believe that we will get the result and that we will go all the way. They could easily give up and say ‘no one thinks we can beat Germany.’ But no one does that. They have that idea in their mind that we can win and that’s what makes it so special to us. The fact they are giving up their time, when they are on vacation, to see us play, that’s incredible.

Next year, of course, Canada hosts the Women’s World Cup. Do you think you can be back here with the senior team?
That’s been my dream for as long as I can remember. To play in the Women’s World Cup. And the fact that it’s so close, that it’s in Canada. Right now, I’m just focused on finishing out this tournament strong. But the World Cup is always in the back of my mind. But I have to perform in these next couple of games, hopefully, to be able to make that impression. It’s a bright future, I am looking forward to what will happen after this tournament. But, I can’t look past Saturday.

Did you talk to Andrew Olivieri and (national-team coach) John Herdman about a plan for you once you made the move from the U.S. program to the Canadian program?
Not too much, actually. We were focused on that I was committed to this team for the U-20 age group and then we are going to see what happens. I can honestly say I have no idea what is going to happen. We haven’t talked about the future of me in this program, yet. Obviously, that’s a conversation that’s going to come up once this tournament is over, because it is a fast transition to the women’s program for next summer. There are five girls on this team right now who are also with the senior team, and that’s very impressive. What I really respect about this program is the fact they bring such young players in, so we get the chance to play with players like Karina LeBlanc and Christine Sinclair and Sophie Schmidt — some of the best players in the world. I hope and I dream to be there.