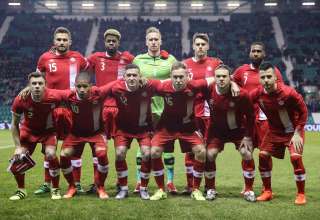 So, well, Fraser Aird sure looked like he was pretty pumped to play for Canada in Scotland, didn’t he?

Canada drew Scotland 1-1; Aird was named man of the match — and this wasn’t a hard selection. He was on a different plane than any of the other players wearing Canadian red or Scottish blue at Edinburgh’s Easter Road Wednesday night.

Playing in front of a sparse crowd (what? Like Canada isn’t a draw for the Scots?) of 9,158, Aird brought Canada to life in just the 11th minute, capitalizing on a dreadful error from Scottish defender Lee Wallace, who had a chance to clear but took an awful first touch that  left the ball in the area for Aird. The Canadian didn’t flub his lines, putting the ball into the corner of the net. Aird, the former Rangers player who played for Scotland as a youth before switching to Canada, now plays his club football for Falkirk after spending last season on loan from Rangers to the Vancouver Whitecaps.

Aird and Simeon Jackson had chances to increase Canada’s lead, but had their chances miss the target. Meanwhile, Scotland’s Robert Snodgrass had an effort go off the post.

Steven Naismith got Scotland level in the 35th, after a scrappy series in the box and Tom Cairney’s initial shot was blocked.

Leutwiler did well to get down low to stop a drive from Barry Bannan.

In the 67th, La’Vere Corbin-Ong made his Canadian debut, and we quickly learned one thing about him — his Rory Delap-like ability on long throw-ins will make him a weapon for Canada in the future. He’s got that ability to turn a throw-in deep in the opponent’s half into what amounts to a set-piece situation.

Ben Fisk came on in the 73rd minute; with Adam Straith and captain Nik Ledgerwood on the field, it gave FC Edmonton three men playing for the Canadian men’s national team at one time — a first for the club.

Aird wasn’t done. He took a drop pass from Ledgerwood and hit a vicious shot towards the Scottish goal that keeper Allan McGregor had to leap to get his fingertips to.

Jordan Rhodes had a chance to win it for Scotland in time added on; he made a good run into the box and was unmarked when a low cross found him. But, inexplicably, instead of shaping his body so he could angle the ball towards goal, he closed his legs and ended up blocking the ball like a hockey goalie closing the pads. The ball bounced away harmlessly. There is probably a metaphor for Scottish football there, but a lot of talk at last week’s Alberta Magazines Conference was about how the era of the thinkpiece has come to an end. So I won’t bore you with an unnecessary thinkpiece about the state of Scottish soccer.