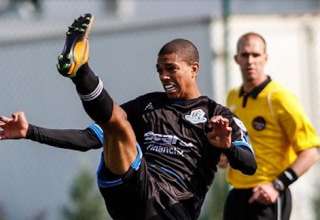 FC Edmonton holding midfielder Bryan Arguez dominated the middle of the park in Sunday’s 1-0 win over the Puerto Rico Islanders; and, his yeoman’s work has been recognized league-wide.

Arguez has been named the NASL Defensive Player of the Week.

Arguez, even though he didn’t score on Sunday (Shaun Saiko scored the deciding goal on a wonder valley) was picked as Man of the Match by myself and play-by-play man Gareth Hampshire during our CBC.ca and TEAM 1260 broadcast.

Arguez won 50-50 battle after 50-50 battle. And he was oh so cool in possession, allowing the Eddies to collect themselves as he played clever passes through the midfield. And Arguez, on loan from the Montreal Impact, did play a role in Saiko’s goal; he rode two challenges and then slid the ball out wide to Kenny Caceros, who delivered the cross for Saiko to finish in the space of two deft touches.

“It’s a nice compliment,” said Arguez in a release issued by the Eddies on Monday. “I’m still getting comfortable with my new team but it’s always nice to get an individual honour.”