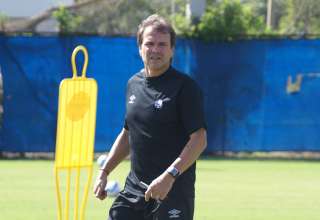 Matt Stinson has the chance to make his debut for the Canadian men’s national team.

The Toronto FC youngster is one of just two changes national team coach Stephen Hart has made to his roster ahead of World Cup qualifiers Nov. 11 and 15 against St. Kitts and Nevis. Just one point out of the two games will ensure Canada advances to the next round of CONCACAF qualifiers. Stinson played for Canada’s U-20 team that didn’t make it out of CONCACAF qualifiers earlier this year.

“It was a pleasant surprise to see two young players playing at that level,” said Canadian assistant coach Tony Fonseca in a media conference call Thursday.

Both Stinson and Morgan will slowly be brought into the fold, to gain experience. Fonseca said they will be given time to adjust to what Fonseca called the “different dynamic” of national-team play. If Canada gets a point in the first game, then the second becomes a glorified friendly, and it offers the chance for national coach Stephen Hart to give them both a lot of playing time.

Because Canada still needs a result from at least one of the two games, the coaching staff decided that bringing in veterans took precedence over looking at too many prospects.

“We wanted to have some consistency for the last game,” said Fonseca.

To bolster the veteran presence, returning to the lineup is veteran midfielder Patrice Bernier, who has recovered from a broken leg and is playing for Danish side Lyngby Boldklub.

Forward Iain Hume is unavailable due to what Fonseca called some nagging injury issues and midfielder Joseph Di Chiara still waits for his first cap. Di Chiara, who plays for Kryliya Sovetov of the Russian Premier League. was called up to the men’s national team for the most recent cycle of World Cup qualifiers, but didn’t get into game action.

Fonseca said that the team wanted to take a look at as many players as possible, and Di Chiara was brought into the fold. Fonseca said there is a chance for a call-up later on in the World Cup qualifying process, but he was clear that this was a case of the young midfielder not fitting into what the coaching staff felt was the best team it could possibly have.

“We felt we needed to move on. We wanted to go with the best team possible, so he was not included.”

Andrew Hainault, who is in the thick of the MLS playoffs with the Houston Dynamo, which holds a 2-1 lead over the Philadelphia Union entering Thursday’s night’s Eastern Conference semifinal second leg, turned down a call-up in October and wasn’t asked this time.

In the last cycle of World Cup qualifiers, Hainault said no because he wanted to remain in Houston and help his squad make the playoffs. While Canada played, Hainault scored a key goal to help the Dynamo’s playoff push. He also scored in the first playoff match against Philadelphia.

But Real Salt Lake midfielder Will Johnson has committed to the national squad; even if RSL makes it to the MLS Cup final, Johnson would leave as his club prepares for the big game, scheduled for Nov. 20.

“All communications Will has had with us is that he is committed to the national team,” said Fonseca.