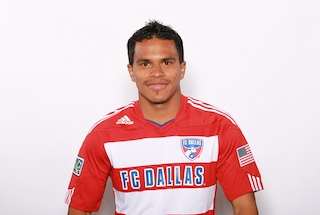 That’s how you feel when your horse wins the race by a nose, right?

Well, this year’s vote for Player of Year from the North American Soccer Reporters was tight. So tight, in fact, that a run-off vote was needed after FC Dallas’s David Ferreira and Chris Wondolowski, San Jose’s Cinderella-story striker who led MLS with 18 goals this season, finished in a tie. They tied in first-place votes and second-place votes. The NASR is not a small organization. So, the odds on this ever happening again in another MVP vote down the road are ridiculous.

Ferreira edged the POTY award in the run-off vote.

That’s a good thing, because in my mind, it shouldn’t have been that close. In fact, I didn’t have Wondolowski even as my second-choice vote on my first ballot.

Yes, Wondolowski led the league in goals, not bad for a guy who made US$48K in 2010. You could argue that Wondolowski was the most underpaid athlete in North America this year, with apologies to everyone in the National Lacrosse League.

But, what jumped out at me was one indicting statistic. Of Wondo’s 18 goals, six came in two late-season hat tricks against Chivas USA and Toronto FC. So, one third of his goals came in what were some fairly meaningless games.

Meanwhile, Ferreira was the best offensive catalyst in the league. The fact that he had eight goals and 13 assists doesn’t do justice to how he transformed FCD from a non-playoff team in 2009 to an MLS Cup contender in 2010. Ferreira opened up acres of space for the likes of Jeff Cunningham and Brek Shea. His passing and vision caused nightmares for defenders. Really, you can’t judge Ferreira until you’ve sat and watched FC Dallas, and see the things that he does to pull defensive lines apart.

And, if you need to know, my second-place vote went to Omar Cummings of the Rapids. Cummings scored 14 times this year, and his lightning pace also helped Conor Casey score 13. Yes, it can be hard to separate the Casey-Cummings duo; but Cummings scored some spectacular clutch goals that got the Rapids to the playoffs; which, like FCD, is somewhere they haven’t been for a while.

If I would have put Wondo in as the second-place vote-getter, would it have been enough to avoid the run-off? After all, the votes were tied after the first ballot — both first- and second-place nods. NASR rules state the winner needs 50 per cent of the vote.

But the little Colombian was the best player in MLS this year.