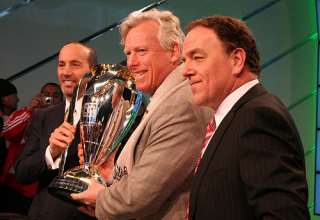 Don Garber, Toronto Mayor David Miller and Tom Anselmi as hosting of the 2010 MLS Cup game was awarded to Toronto.

Earlier this year, both Vancouver Whitecaps president Bob Lenarduzzi and former Toronto FC director of soccer Mo Johnston were quoted in various media outlets, assuring that Major League Soccer was going to strike down all requirements for Canadian teams to have a set number of Canadians on the roster.

Under the 2010 rules, Toronto FC was allowed 13 international slots, with a minimum five of those for use on American players. The rest of the roster had to be filled by Canadians. Now, because MLS allows GMs to trade anything that isn’t nailed down, TFC actually had more international slots for the year.

But, the fact remained that all of the other slots above and beyond those international allocations had to go to Canadians.

With Vancouver coming in next year, the thinking is that MLS will simply give each team a quota of North Americans it has to have on its roster. After all, as TFC officials have long argued, there isn’t enough Canadian talent willing to come back from Europe to fill one roster, let alone two. Or three, which will be the case when Montreal comes into the league in 2012.

But, league officials have repeated the claim that there is no rule change ready for rollout. According to the league, all roster-rule changes for 2011 are “still in the works” and “it’s still too early for leaning one way or another at this point.”

It’s not as easy an issue as Toronto FC’s brass have painted it. MLS is very conscious of keeping the Canadian markets happy — as in the fans. The league itself is blown away by the success it has enjoyed in Canada. TFC has a national TV deal with CBC. The fanfare around the Whitecaps has been incredible. But, it knows that Canadian fans want Canadian players to cheer on.

When MLS Cup was awarded to Toronto back in March, MLS commissioner Don Garber told me that the league wants to boost the Canadian national soccer program in much the same way its has lifted the Americans; that he considered it a league goal for not only the Americans to be beating Mexico in CONCACAF competitions, but for Canada to be doing it, too.

So, there’s a danger that, while striking down the rule may help the front offices of TFC and the Whitecaps, it might hurt the league’s image with fans across the country.