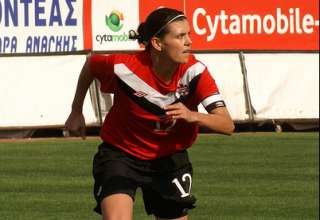 The Canadian national women’s team came back from a one-goal deficit to defeat Sweden Tuesday in a closed-door friendly in Phoenix, Az.

The Canadians trailed until the 74th minute when Chelsea Buckland, who had just come on to the pitch a minute before, equalized. Coach John Herdman’s decision to bring off Desiree Scott for the Oregon State University forward came up trumps.

Christine Sinclair then gave Canada the win with a goal two minutes into stoppage time. After a hectic WPS and World Cup schedule, Canada’s reigning player of the year took a sabbatical and missed Canada’s last two friendlies against the United States. But, in a style to which Canadian fans have grown accustomed, Sinclair returned to score a key goal.

Jessica Landstrom opened the scoring with a great volley — and Swedish forward Lotta Schelin had a great chance to equalize right after Sinclair had given Canada the lead. But Schelin fluffed the chance, which allowed Erin McLeod, who came on in relief of starter Karina LeBlanc, to get the win in goal.

Herdman is prepping the women’s team for the upcoming CONCACAF Olympic qualifiers, which take place in Vancouver beginning in late January.