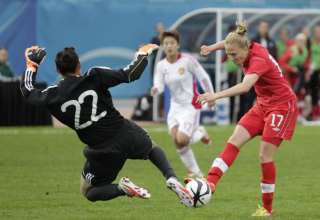 Christine Sinclair and Diana Matheson combined on a last-gasp free kick to give the fans in Moncton something to cheer about.

Matheson, making her first start for the Canadian women’s team since last year’s Pan Am victory run, marked a successful return from injury, playing 90 minutes-plus. And, she made a major mark in the Wednesday’s friendly against China, delivering an injury-time free kick that Christine Sinclair redirected into the goal to give Canada a 1-0 win.

“It was a great ball by Matheson, her and I have a connection. It would have been hard to miss,” Sinclair was quoted on the Canadian Soccer Association’s Twitter feed after match.

But the feel-good last-gasp goal shouldn’t completely mask what was a frustrating performance by the Canadian team in front of the home fans in Moncton.

Make no mistake, the Chinese national team is nowhere close to where it was a decade ago. It is a rebuilding program, a second-tier women’s soccer program, and it has slipped from the days where you’d mention China alongside the likes of the Americans and Norwegians, in the first real glory period for women’s soccer.

China is an example of the second-tier program that coach John Herdman has repeatedly said that Canada is having success against. And whenever he says that, he always adds that Canada’s challenge is to beat the first-tier teams.

On Wednesday, Canada had chance after chance and finally scored with literally the final kick of the game. When it plays the likes of Sweden and Japan at the Olympics — those first-tier nations — Canada won’t get six or seven great chances in order to score one. The Canadians need to be clinical, so they know that if they get that one golden chance, they will convert.

The Canadian women were anything but clinical against the Chinese. In the fifth minute, after Kelly Parker chested down the ball in her path, Brittany Timko had Chinese keeper Wang Fei at her mercy, but her volley went wide.

Timko was then sent in alone by a Sinclair through ball, but Wang came charging out of her penalty area. Timko, instead of trying to dance around the keeper, blasted right at her feet.

Then, Sinclair missed on a sliding attempt after a return pass from Parker led her maybe by a few inches too much.

But that’s the thing that separates a team that can get a result against the likes of Japan and Sweden to a team that will leave the 2012 Olympics early. Those matters of inches. Canada needs to develop more of a killer instinct, one that it didn’t show enough of in Moncton.