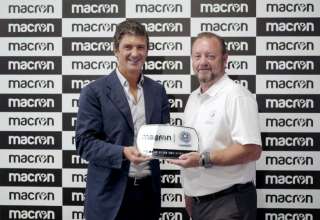 So, the Canadian Premier League has confirmed that it has made Italian sports apparel manufacturer, Macron, the official provider of kits for the circuit’s seven teams.

Of course, when the open trials kicked off in Halifax, we already knew this to be true, as the CanPL staff on the field were all photographed wearing Macron-branded gear.

The league and Macron promise that each team will have bespoke kits — which I think we can all take to mean that we won’t see the same pattern being worn by Forge FC and, say, some Serie B team. Or maybe they’ll be truly bespoke, custom-kit fittings for everyone!

What can we expect? Well, if the launch of the team branding is any indication, the release of every new kit will generate raves or defensive reactions from the home fans, and those in the other six cities will mock the colour schemes, the designs and ask what the hell the marketing people were thinking.

But, if each team’s shirt — home, away and, where warranted, thirds — is going to be truly custom-designed, what can we hope for?

Look, if the CanPL can get its kits into a Mundial fashion spread, that’s the measure of success, isn’t it?

Chevrons are everywhere right now. Tiny chevrons. Large chevrons. Chevrons on sleeves. Chevrons up the sides of shirts. Players look like they’re giving directions with all of the chevrons they’re sporting on modern kits.

Just because they’re so common, can we have, like, no chevrons? Bring them back in a decade or so. Maybe.

The Number’s the Thing

I speak from my experience as a broadcaster. I have seen numerous examples of fancy new kits that look nice close up but, on the field, are disasters. That’s because the design of the fonts or the colours of the numbers and namebars make them hard for fans and broadcasters to see.

In NASL, San Antonio Scorpions unveiled a jersey that was white, with white numbers. Sure, up close, you could see the black outlines of the numbers. But, in the broadcast booth, you saw 10 outfield players wearing white kits. When the lights went onto them for night games, the white reflected and it was all that much worse. Don’t put numbers in squarish, digital fonts, where it’s hard to tell a zero from an eight when you’re more than 10 feet away.

Make sure there’s lots of contrast between the numbers on the back and the base colour of the shirt. There is no excuse not to make sure of it.

Size For the Fans

Athletes look fine when wearing form-fitting shirts. Many fans do not. I am a fat person. I know a lot of other, shall we say, large people. I like to buy football shirts. But nobody needs to be able to make out the outlines of the nipples of their fellow fans. So, make sure there are smaller fan kits for the ones who look good in those things and more modest, larger sizes for those of us who ate all the pies.

The crest can tell a story, but it should be self-evident. If it needs to be curated, it’s too much. This goes double for the shirts. Look, no one really cares why there are triangles on the jersey and why they’re supposed to be raindrops or that you picked forest green for a shirt to represent the stand of trees across the street from the stadium.

If you need a guidebook to, ahem, “understand” what the jersey is about, stop now. Step away from the computer. Walk out of the studio. Get your head clear. Come back with a simpler plan. If you come back and say, “blue and white stripes would look good,” without any back story to it, you’re winning.

Look, when the kit is unveiled, no matter if you are the Coco Chanel of soccer-kit designers, Twitter is going to respond with vitriol. You have to grin and bear it. For every “shut up and take my money” response you get, you’re going to hear “what the HELL is that” 10 times. Laugh. In the end, it’s a kit.