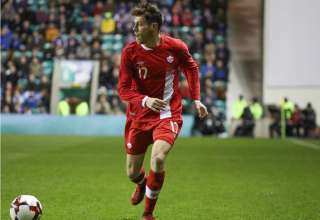 Maxim Tissot had a trial with D.C. United in 2016; the club couldn’t fit him in the roster, but told him to come back in 2017. After that second trial — and a heck of a lot of paperwork — Tissot has a chance return to MLS

Following the conclusion of D.C. United’s first preseason camp in 2017, Maxim Tissot was on a plane, headed back to Canada. The Canadian international had just finished his second trial with the club. The first came last summer, shortly after Tissot was waived by the Montreal Impact, the club with which he had grown up — the club that initially brought him into Major League Soccer as a homegrown player.

Tissot had a week to impress United boss Ben Olsen and his coaching staff, with United mired in a disappointing campaign at that point in the season. Tissot made his mark during that audition, but the team needed help elsewhere on the field. So the trial ended without a contract offer. Tissot went back to Canada to join the Ottawa Fury, then of the North American Soccer League (NASL), knowing that United would give him a second opportunity to earn a spot with the team during the 2017 preseason.

And so Tissot was on the plane, heading back to Canada, having just signed a contract with D.C. United.

All that was left was to get his work visa, and head back down to the United States to join up with his team.

“I had no idea,” Tissot said of the difficulty of the process to obtain his visa. “My flight was booked to meet the team in [Washington] D.C. before leaving for Clearwater [Florida]. Somehow, I couldn’t go through, because I didn’t have my visa with me when I crossed the border. They sent me back home, and they told me it would take about 10 days to figure it all out.

“At that point, I had signed already. So I couldn’t train or do anything else for risk of injuries. So I spent more time with my girlfriend, and [she] was happy about it.”

Eventually, with his visa all worked out, Tissot joined United for the club’s second preseason camp. United officially announced his signing on February 24 and, the next day, Tissot played a couple of minutes for the Black-and-Red in its final preseason game of the season, against the Philadelphia Union.

A welcomed return to the the league in which he had started his professional career.

“He’s young, he’s an international soccer player. He’s getting time with the Canadian team,” United head coach Olsen said of Tissot. “He has a lot of games under his belt for a youngster. We hope with him in our environment, and us pushing him, that he can be a piece in this league.”

Tissot’s first order of business in D.C. is finding how he continue to get minutes on the field. Sometimes a winger, but mainly a left back, Tissot is behind incumbent left back Taylor Kemp on United’s depth chart. Kemp took over the left back spot in his second year as a professional, during the summer of 2014. Since then, the spot has been all Kemp’s, and Tissot’s signing helped shore up a position in which United had no natural cover.

So while the 13 times capped Canadian international fights for playing time with the Black-and-Red, he’ll get game time with the Richmond Kickers, D.C. United’s United Soccer League (USL) affiliate.

“It’s going to be hard,” Tissot said of his prospects for playing time with United early on. “Taylor [Kemp] has been doing well. I knew coming in, that it would be tough job to get first team minutes right away.

“Coming in, Ben [Olsen] told me Richmond would be an option, and I was on board with that. I want to help the first team as much as I can, and be ready to be called in.”

The Richmond experience, though not his ultimate goal, might help the 24-year-old continue to grow as a professional. In four seasons with the Impact, Tissot appeared in just 44 league games, starting 22 of those contests, and playing 90 minutes just 14 times. After the trial with United last year, Tissot joined up with Ottawa, and played in 19 games, consistently playing for 90 minutes.

“It allowed me to get a good rhythm in, get back with the national team, Tissot said of his time with Ottawa. “Which is very important to me. Confidence all around. With Montreal, I was in and out all the time.”

After his most recent Canadian call-up, in which he played 68 minutes in a 1-1 draw with Scotland, Tissot immediately returned stateside, and headed down to Virginia’s capital to play for the Kickers. In the team’s 1-0 win to start the USL season, Tissot played 70 minutes, playing as a wingback on the left hand side, as the Kickers opted for a 3-5-2 formation.

So in the space of four days, Tissot played a combined 138 minutes for two different teams, on two different continents. Just what one might hope for if they aren’t about to play for their MLS team.

“Sometimes getting out of your comfort zone and getting away from Montreal and Canada and coming to a new place is healthy,” said Olsen of Tissot’s move to the U.S.. “And I also think it’s healthy to go get games. And [Tissot is] going to continue to get games here with Richmond, and continue to develop.

“We will see what that leads to. He’s a great kid, he’s a hard worker, and very open to feedback, and had a good skillset for this league,” added Olsen. “We want to work on some of the key moments in defending and, if we can get that right, we think he’s going to be a nice piece.”

Those minutes in Richmond might also help Tissot impress his new national team coach ahead of this summer’s CONCACAF Gold Cup. Since Tissot’s first cap in 2015, the recently appointed Octavio Zambrano is Tissot’s third national team coach. Benito Floro first brought Tissot into the fold at the end of 2014, handing Tissot his first cap in January 2015 against Iceland.

After Canada failed to qualify for CONCACAF’s Hexagonal group for the 2018 World Cup qualifying, Floro was replaced on an interim basis by Michael Findlay. Tissot continued to get call-ups and when Zambrano took over as head coach just before the Scotland friendly, Tissot again earned a call-up from another manager.

WIth all the recent managerial changes, Tissot is hoping from some stability in the upcoming years for the national change.

“For the program to go forward, there needs to be a coach that stays for at least two cycles, to really implement his stuff,” said Tissot.

Zambrano’s first real test as Canadian manager will be the Gold Cup this summer. Canada have not advanced out of its group at the Gold Cup since 2009. In this year’s edition, Canada is grouped together with Honduras, Costa Rica and French Guiana. Honduras and Costa Rica are currently partaking in the Hex to fight for a place at the World Cup, meaning that Canada will have plenty of work to do to advance out of the group.

Of course, just scoring a goal at a Gold Cup would mark some improvement for Canada. Canada hasn’t scored in each of the past two editions of CONCACAF’s biennial tournament.

One thing that might help Canada score that elusive goal has been the additions of dual nationals in recent years. After losing out on the likes of Owen Hargreaves, Jonathan de Guzman and Asmir Begovic, all players who could have appeared for Canada instead of England, Netherlands, and Bosnia and Herzegovina, Canada has had a change in fortune in recent years. Junior Hoilett and Scott Arfield, for example, two players currently playing in England’s top two divisions, chose Canada over other international teams.

“You can’t blame them. If they can get regular minutes with a better national team, they can play in more competitions, more games, they’ll do it,” Tissot said of players such as Hargreaves, de Guzman and Begovic. “We won a big battle with Junior Hoilett staying with the national team, when he had other options. We need more of those small battles to get a good team on the pitch.”

For Tissot now, his goal is to be unlike so many of his compatriots, who in recent years, have been receiving call-ups to the national team while not earning minutes with their club team.

“I need to play. If it’s not with D.C. United, it will be with Richmond,” said Tissot. “I saw a difference in my game last year, when I went with the national team, because I played a lot for Ottawa.”