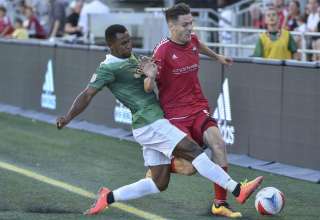 The Tampa Bay Rowdies are leaving the NASL for the USL. The Ottawa Fury have announced that they are moving to USL as well, but that move still needs to be signed off on by the Canadian Soccer Association.

But, according to FC Edmonton co-owner Tom Fath, his team has no interest in leaving NASL.

“There’s zero chance of our team moving to USL,” said Fath. “We have no interest in moving to that league.”

Fath was responding to a Twitter rumour that FCE might consider a move to the third division from the second. Fath said that years ago, before the USL got new ownership, they had some talks with that league. But there’s been no contact recently.

The Faths (Tom and his brother, Dave) are the longest standing owners in NASL.

Both the Fury and Rowdies announced their moves on Tuesday.

“We’re excited to be joining the fastest-growing soccer league in the world,” said Fury President John Pugh in a release issued by the club. “The USL’s goal is to be the top second division in the world and we are thrilled to be part of it. Our growing and loyal fan base deserves and can expect a very high caliber of play and tremendous competition. Go Fury Go!”

USL is planning to push for second-division status in the United States, but it is at the third-division level at the moment. In Canada, because this country’s national soccer champion is decided via the Voyageurs Cup — where NASL and MLS teams compete against each other — the Canadian Soccer Association is not as hung up on divisional distinction.

A potential Fury move to the USL would need to be approved by the Canadian Soccer Association. Yesterday, the CSA gave a “no comment at this time” when asked about the Fury’s situation. That’s a little different than the CSA’s stance at end of September, when it confirmed that it had yet to receive any paperwork from the Fury.

“As a league in North America, the NASL operates in an environment where owners are free to take their clubs wherever they choose. All we can do is acknowledge that reality and move forward with our business, which is exactly what we’re doing right now. We have never had a stronger and more unified group of owners who are committed to the league’s model, its structure, and its long-term vision. With a half-dozen serious expansion discussions in progress, the league looks forward to adding new owners who share in the board’s vision.

“We have ambitious plans for growth, and we’re proud that the flexibility of the NASL model remains an extremely attractive proposition for investors seeking to become part of an authentic, competitive soccer league. While we don’t want to take anything away from what is sure to be another exciting postseason, we’re focused on ensuring that, in 2017, the NASL is one of the most competitive soccer leagues around.”

Bill Edwards bought the Rowdies near the end of 2013 and has been one of NASL’s most outspoken and colourful owners. In 2015, he fired coach Thomas Rongen and general manager Farrukh Quraishi less than a year after hiring them. “’They had a five-year plan, and I have a one-year plan.”

This year, Edwards caused waves in the league when he ordered the public release of a video illustrating the number of times he felt his team had been jobbed by the referees. The Professional Referee Organization (PRO) also administers officials for USL, so he’s not getting away from them by moving leagues.

“This move is a necessary and positive step toward reaching the long-term goals and objectives of the club,” Edwards said in a release issued by the Rowdies.

VSI Tampa Bay played at the USL-PRO level in 2013, but lasted just one season in that league. Poor attendances were driven by the stadium’s poor location and the competition from the NASL Rowdies.

The Fury won the 2015 NASL fall season going away, but there were signs of trouble before the playoffs. Coach Marc Dos Santos announced he would be leaving the team at the end of the season for Swope Park Rangers (he’ll return to NASL in 2017 as the coach of the San Francisco Deltas). After the Fury lost the final, the team went on a cost-cutting spree that saw many of the 2015 regulars move on to other teams.