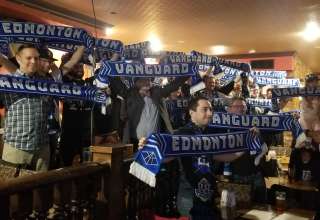 If not for the Ottawa Fury’s’ announcement that the team wants to remain in USL for the 2019 we’d be in a real lull in the Canadian Premier League’s news cycle.

The seven teams have been unveiled. The logos are out there. The coaching announcements, for the most part, have been made. But, the biggest announcements of all — the signings of players — have yet to begin.

So, we’ve seen membership numbers for all the clubs stall. The hardcore supporters bought in when their local teams were launched. But the so-called casual fan, as I’ve heard over and over from both players and fellow media members, won’t buy in till they know who is actually going to be playing.

This is the time when teams need to build even stronger connections with their supporters groups, with their existing members.

Krystal Dykes was brought in by FC Edmonton to be the club’s manager of ticket sales and service. Last season, she was with Southampton of the English Premier League. She’s an Australian who has experience with pro sports in that country, as well. She knows her rugby and her Australian rules football.

She says that it’s important for teams to build strong ties to their supporters. As in, the teams can’t really have down times.

“You have to be present, so the relationship is there in the peaks and also in the valleys,” she said.

Honestly, I wasn’t expecting a lot from the event. The weather was the worst Canada can offer. Barely above freezing, so instead of snow you get slush and cold, cold rain. Not a night to be out in the city. Honestly, it’s more comfortable if it’s -15 C and snowing, because you don’t get soaked. It was the kind of night where you stay home and, well, hibernate.

But, the pub was full. Must have been at least 50 Eddies enthusiasts there, which doesn’t seem like a massively high number, but for a supporters event, it was pretty damn good. Dykes was there, engaging with supporters, as was general manager Jay Ball. Coach Jeff Paulus was there.

To me, though, what was important is that I saw faces I’d never seen before. Kids, too. It wasn’t a case of the same old small cadre of guys I’ve known since 2011.

And, in its small way, the launch was an example on how supporters and clubs can keep their teams in the Canadian soccer consciousness when the CanPL’s biggest mission right now is to prep the series of open tryouts which start this coming week — and to control its message over Ottawa (which looks to be, no public pronouncements other than strongly controlled messages on the league site).

While no team has made roster announcements, the coaches and front offices have been working away, identifying players. Coaches are working their connections. They do have some ideas on who might be putting on the kits of their respective teams. So, expect the coaches to go into open tryouts not with blank slates, but with fairly defined goals.

They’re not going in thinking “I will take all of the best players I can” but “I might need some depth at fullback and maybe a third goalie, let’s see if there’s anyone here I can invite to camp.”

My past experiences covering open trials, whether in soccer or other sports, is that they act more as PR exercises for the teams involved. But, since the CanPL mantra is that the league will give new opportunities to Canadian players, it’s important for the league.

But, maybe more importantly, it keeps the league, which has made the majority of its team and coaching announcements, in the eyes of prospective fans (and sponsors). It gives the league’s website plenty of new content opportunities.

Like you all, I’m waiting to see the first player signings.