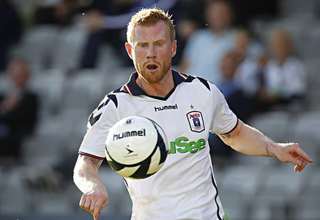 Jones, a product of the Manchester United academy, made the call to another Red Devils academy graduate, fullback Adam Eckersley. Jones wanted to sell Eckersley on the idea of coming to Edmonton to play in the NASL.

In January, Eckersley finished a short-term contract with Scottish side, Hibernian. And, on Thursday, the Eddies announced the Englishman as the club’s lastest signing.

“It was Ritchie Jones who reached out,” said Eckersley. “And I wanted something a bit different for my family. And my little brother has played in Canada, for Toronto, and he had nothing but good things to say about Canada.”

Richard Eckersley appeared in 72 career MLS games for Toronto FC from 2011-13. He was traded to the New York Red Bulls and has since returned to England.

“He really liked it in there,” said Adam. “I think he would have stayed had things worked out differently for him.”

Adam admits that he has yet to watch an NASL match. But, as soon as he finished his contract in Scotland, he was busy packing his family for the move across the Atlantic. He and his wife have a two-year-old boy and a seven-month-old girl. His wife has got her work permit; it’s a priority for FC Edmonton to try and settle families of players the club has signed, as it eases the move and makes the team a more appealing destination. Many clubs simply focus on the players they’ve signed and don’t offer any considerations for the families. FCE has worked hard over the years to try to ensure stability in their players’ home lives.

But Adam, who has played in the Europa League as a member of Danish side AGF Aarhus, is impressed from what he’s been told by FC Edmonton coach Colin Miller.

“I spoke to Colin before Christmas, and my first impression is that he’s a person who really knows what he wants. He is very driven. I know that he’s the kind of manager players love to play for.”