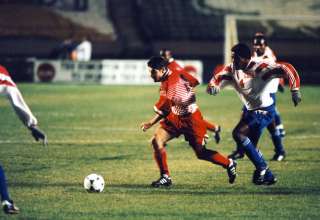 The fact that the Canadian national team is even flying to Havana to play Cuba in a World Cup qualifier later this week is a sign of just how far the island nation’s soccer program has come.

We still don’t know a lot about the team, other than the fact that it lost two February friendlies to Jamaica, and that TFC forward Ryan Johnson scored against Cuba playing for the Reggae Boyz.

But, for long-time Canadian supporters, they can think back 16 years.

It was October, 1996 — and the CONCACAF World Cup qualifying schedule had Canada playing Cuba back-to-back. One home game on Oct. 10, then an away match Oct. 13. The home date took place at Edmonton’s Commonwealth Stadium — which had been lovingly nicknamed “St. Paul’s Cathedral” by Canadian supporters because of Paul Peschisolido’s knack of scoring goals there.

The second game, the road date for Canada, was played at… Commonwealth Stadium.

Canada won both matches 2-0 (and Peschisolido scored in each one).

Those were the second and third Canada games I had been assigned to cover (well, I was the editor of Vue Weekly at the time, so I kind of assigned myself). And, I still have some strong images of the Cuban team that visited Canada.

First off, why was the road date played at Commonwealth? At the time, the Cuban federation told CONCACAF it had no suitable venue in which to play it home games, so their home schedule was given to the opponents. So, while Cuba was officially the home team for the second of the two matches, the game was played in the cold of Commonwealth.

OK, cold, relatively speaking. I remember that we actually were blessed with very pleasant autumn weather that week, and most of the people in the city were in shirt sleeves. But, the Cubans, who had showed up with a bare minimum of equipment, barely enough balls with which to practice, were shivering as if they had been tossed in a deep freeze. When I was in Havana a couple of years ago, I was told by a Cuban diplomat that schools close there if the temperature dips below 10 C.

And that’s the mystery — and the romance — of Cuba. Almost everything we learn about the country comes by anecdote. We know absolutely nothing about their national team.

The second thing to remember about those two 1996 matches against Cuba was Peschisolido’s goal in the Oct. 10 match, which made it 2-0 after Alex Bunbury had opened the scoring. While there have been more important goals scored for Canada — think the 2000 Gold Cup and the run-up to the 1986 World Cup — no single tally was as much a work of art as Pesch’s tally on that night at Commonwealth. If, for its 100th anniversary, the Canadian Soccer Association wanted to make a list of the 10 greatest goals scored by Canada, this would be a hard one to beat for No. 1. Peschisolido, who is not a tall man, chested a ball down in front of three Cuban defenders, reversed direction, then cut across the box (beating a fourth defender in the process). A fifth Cuban tried to close him down, but he whacked the ball off that player’s leg, then smashed a volley past Cuban keeper Odelin Molina.

Fast forward to Cuba, 2012. At least now the team has the capacity to host a game. And, it won’t be an easy task for Canada, if we can look back to qualifying for South Africa 2010 as a measuring stick. The United States traveled to Cuba and escaped with a rather ugly 1-0 result thanks to a Clint Dempsey goal. We know that about 8,000 fans showed up.

While the Cubans struggle on the road, at home they are tough to break down.

So Friday’s game is all about three points, not style.