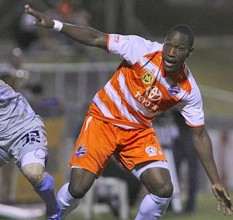 That’s an appropriate way to describe how FC Edmonton fullback Eddie Edward felt on Saturday afternoon. The Ottawa native, who spent last season with the Puerto Rico Islanders, was confirmed as an FCE player for the 2013 NASL season. But, at the same time, he found out that his long-time pal, Kenny Caceros, had been cut.

Caceros spent the 2012 season with FCE. And, he helped sell Edward on the idea of coming to Edmonton. In the cruelest of ironies, Edward got a job, while Caceros was left off of coach Colin Miller’s roster.

“It definitely was tough,” Edward said at Commonwealth Fieldhouse on Tuesday. “I tried to be there for him. But, what happened doesn’t change the fact that Kenny is still a great player. It unfortunate, but it’s a business. I am confident he’ll be all right.”

Edward got a knock on his ankle and sat out of Tuesday’s game against the CIS University All-Stars. But he said, so far, his decision to come back to Canada to play has been a happy one.

“I love it,” he said of the training sessions. “Every time we step on the field, it’s so intense. Coach Miller is trying to instill a new attitude in this team. Every practice, every day, it’s so intense. And I can see we are getting better, and I think this will translate to the season.”

Edward spent last season with the Islanders — and the team is taking the 2013 NASL season off in order to reorganize. The plans are for the club to return in 2014, but there are no doubt skeptics who will feel we have seen the last of the club in the North American second division.

“Definitely at times last year, there was the feeling that things were not being run properly,” said Edward. “It’s too bad, because there is great potential there for the club. It’s unfortunate that this had to happen just after they renovated the stadium, put in new grass. I know how much the Islanders mean to the island.”

The right back says he’s willing to take on whatever role Miller has in mind for him. Before going to the NASL, he was the Can-con on the FC Dallas roster — and he got into one game, as a holding mid against Kansas City, even though he’s listed as a defender. In his mind, you have to take the opening when it comes.

But, even though he only ever got into the one game with FCD, he doesn’t feel like he’s been hard done by.

“I don’t look back at my time with them as a frustrating time,” he said. “It was an amazing opportunity. It was a very positive experience for me, to train with players of that caliber. It was a great opportunity for me at such a young age. I still talk to a lot of their players.”