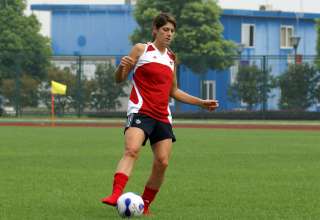 The Canadian Soccer Association has called a press conference for Wednesday, in Oakville, Ont., where Kara Lang is expected to end her playing career all too soon.

Lang, who has suffered through a series of knee operations, is just 24.

CBC soccer analyst Jason DeVos is also the technical director of the Oakville Soccer Club; so when CBC reported that the presser is for Lang’s retirement, we can take it as Gospel.

When a player retires, it gives us in the media the chance to reflect on favourite moments — clutch goals, great passes. I remember then-women’s coach Even Pellerud bragging about how Lang’s rocket-like free kicks were just as powerful as any man could muster.

Back in 2004, I was the editor of In-Flight, the official magazine of the USL’s Edmonton Aviators, a franchise that went bankrupt in the midst of the team’s inaugural season. The Aviators had entries in both the A- and W-Leagues. The club played doubleheaders — a men’s game and a women’s game for the price of one ticket.

The team was regularly plagued by attendance numbers lower than 1,500 per game. But, on June 15, a game with the Vancouver Whitecaps drew more than 3,000 — and a heck of a lot of them were girls. Lang had been one of the two superstars (along with Christine Sinclair) of the 2002 World U-19 championship held in Edmonton, where Canada lost to the United States in an almost-full Commonwealth Stadium. When she returned to Edmonton with the Whitecaps, legions of girls screamed for her. After the game, the fans lined up for autographs.

It was amazing to see so many girls in soccer jerseys hanging ticket stubs, programs, shirts over the rails to get autographed. How many of those girls had been inspired to play because of Lang?

All because they got to see a rock star that day — Kara Lang.

Six years later, and her career is done.