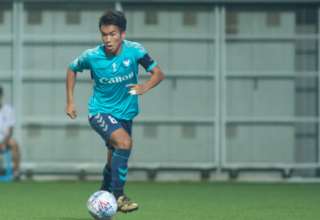 York 9 has added Japanese midfielder Wataru Murofushi, a creative midfielder who was named the player of the year in the Singaporean League.

Murofishi’s Albirex Niigata side went undefeated in Singaporean League play and won the domestic cup and the league cup. In 19 league games, he scored eight times and added four assists.

“Wataru is technically gifted, incredibly exciting to watch, and he’s got exactly the right frame of mind to come continue his professional career in Canada.” said York 9 manager Jim Brennan in a release issued by the team. “He’s explosive and exceptionally quick off the ball. He’s going to be a great asset to our club.”

Oe major asset is Murofushi’s age. He’s only 23, so it’s not a case of a long-in-the-tooth international coming over for a last kick at the can. But he does have a history of injury problems.

According to this item from the Footballing Association of Singapore, Murofishi was looking to move to the United States before accepting the contract with Albirex Niigata.

“Since I had many injuries during high school and college, there was a chance I couldn’t be a big success as a player,” he told the league’s official website.“I wanted to go to America first but last December, Chairman Daisuke Korenaga called me and asked me to join (Albirex). It was totally unexpected… (but) since my goal was to play overseas and the first step (for that) is to speak English, and Singapore is English-speaking, so I thought ‘why not?’”