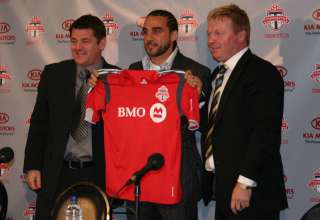 The 2009 signing of Dwayne De Rosario, Canada's best-ever MLS player, can't be compared to the many bad decisions TFC has made about foreign players.

This weekend, Major League Soccer’s competition committee will discuss whether or not to alter or abolish special regulations which require Canadian teams to carry only Canadian players outside of their international/American allocations. The question: Does that rule destroy the competitive balance between American and Canadian clubs?

It is troubling that the only evidence the committee will have to work with comes from four shambolic years of TFC mismanagement.

It’s like having to decide on new rules of the road based on the actions of one chronic drunk driver.

Toronto FC needed to save itself from its own front office. But, for the better part of four playoff-less seasons, various coaches and former director of soccer Mo Johnston consistently blamed the special Canadian content rule for its troubles.

But, were the Canadians the problem in Toronto FC’s 2010 season?

Defenders Adrian Cann and Nana Attakora were the best two members of the backline. Until a late-season swoon, Cann would have been in the running for Newcomer of the Year, which goes to best non-rookie first-year player in MLS. Cann was named the team’s MVP on Thursday.

The problems in the back? How about the late tackling, slowfooted Latvian Raivis Hscanovics and the Russian fouling machine, Maxsim Usanov? The pair were brought in to the team in March — both players represented by Star Management Signings, an agency which specializes in representing players from Eastern Europe. When the deal was made, SMS confirmed that Usanov had received a four-year deal, so that contract is on MLS books for a while.

While Canadian Julian de Guzman certainly didn’t play up to Designated Player standards, he was not the worst part of the midfield. Jacob Peterson and Nick LaBrocca, two depth players from the Colorado Rapids, had regular spots in the TFC midfield, and regularly underwhelmed. Both are Americans. Peterson scored once. LaBrocca’s only goal came when a cross he made was bent towards goal in a BMO Field windstorm. It was a fluke.

Dwayne De Rosario, the Canadian mainstay in Toronto FC’s starting XI, was named to MLS Best XI, led the Reds in scoring and added another outstanding season to his resume. Of the 33 league goals the Reds scored this season, 15 came from DeRo. If there is ever to be an MLS Hall of Fame, De Rosario will be a first-ballot choice.

Really, judging by Toronto FC’s record in 2010 — and there will likely be a massive change in direction in 2011 — you could argue that the Canadian quota prevented then-director of soccer Mo Johnston and head coach Preki from signing even more members of the Colorado Rapids’ taxi squad and journeymen from the lower divisions of Eastern European leagues whose top divisions don’t meet the MLS standard of play.

There has been a competitive imbalance between Toronto FC and many of the American teams since the team was launched. But that imbalance was created by a front office that took fliers on depth players from MLS — and other leagues — who hadn’t proved they could start regularly in this league. It had nothing to do with the Canadian quota.

Vancouver has an excellent academy. The club has groomed Marcus Haber, who is taking his game to England. Ethan Gage. Randy Edwini-Bonsu, who scored regularly for the Canadian U-20 program. It’s youth development system is further along than the Reds.

There have been some disastrous Canadian signings made by TFC. National team scoring ace Ali Gerba, a deal which was championed by fans and media when it was made, couldn’t stay in shape. But the bad Canadian deals have been outnumbered by the number foreigners who couldn’t make the MLS grade. Remember the lead-footed first touch of Andy Welsh? Or Collin Samuel, a man who made Gerba look svelte; Carlos Ruiz, the only TFC player to ever come into a game as a sub and then be subbed off as a coach’s decision; Laurent Robert, a man who didn’t believe running was part of his contract; Mista, the Designated Player who didn’t score an MLS goal; Pablo Vitti, the Argentine who could dribble but couldn’t shoot.

Sorry to the front offices of both the Whitecaps and the Montreal Impact; but it’s hard to take a request to lower or eliminate the Canadian quota when the one domestic team with an MLS track record has been so blatantly mismanaged.

Judging by the simple fact that TFC’s season was ruined by poor choices in international and American signings — and that Canadian players were directly responsible for many of the points earned by the club this season — you could actually argue that TFC’s new general manager in 2011 could be helped by keeping the Canadian quota the same.