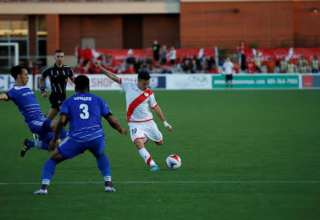 It wasn’t pretty. But, considering the circumstances, it was effective.

After captain Albert Watson was sent off in the first half, FC Edmonton was forced to hunker and bunker in its NASL season opener at Rayo OKC. But a valiant double-save from FCE keeper Matt VanOekel and some dogged defending from the Eddies allowed the visitors to escape with a 0-0 draw.

“I am very proud of them tonight,” said coach Colin Miller. “The way we defended tonight, it’s there for everyone to see. It was a real test of character for our team. It’s a new opponent, a team that has a lot of very experienced players. And I’m disappointed that we went down to 10 men. It changes our substitution plan. It changes our whole outlook on the game.”

Rayo OKC had two golden chances to win the game in the 78th minute; veteran striker and Celtic great Georgios Samaras got into the box and spanked a low drive at goal. VanOekel came out, took away the angle, and made the save. But the ball went out to Rayo’s Richie Menjivar at the top of the box, but VanOekel moved smartly across the box and sprawled to make the second stop.

Rayo had a decent chance earlier in the second half which, ironically, came off an errant pass from VanOekel. His pass from the box went right to Rayo striker Robbie Findley. But the former Toronto FC man sent his shot wide of an open goal.

Watson saw straight red in the first half after he gave the ball away to Rayo OKC’s Marvin Chavez. Watson got caught with an arm and leg out, Chavez went down, and referee Nima Saghafi pulled out the red.

While Miller suggested that Chavez may have been looking for the foul, he didn’t protest the call itself. In fact, he said that Saghafi had a good game and was consistent through the 90 minutes.

“It (the red-card incident) was difficult for me to see, it was at the other end of the pitch,” said Miller. “But there are some players at this level who are going to go down like that. But, it was a very bad first touch from Albert. That touch takes him right into the player.”

Pape Diakite was arguably the best Eddie outside of VanOekel. The central defender bravely broke up attack after attack. Colin Miller said that Nik Ledgerwood’s work in the middle of the park was “immense;” and, remember that Ledgerwood was coming off a full 90 at Azteca Stadium in the middle of the week. And, after coming in to fortify the defence, Canadian Mallan Roberts acquitted himself well. For Roberts, it was a big moment, because he’d lost his starting place.

“Mallan hadn’t been well, and with his attitude of late, he wasn’t in the team,” Miller said.

With Watson suspended for next week’s home opener against Minnesota, the safe bet is that we’ll see the Roberts-Diakite central-defence partnership get another go.

But, despite a lack of offensive chances, a point on the road is a decent return for the Eddies. Remember that, last season, they opened the NASL campaign at Jacksonville — the new expansion team — and conceded within 12 seconds on their way to a loss. So, this 0-0 in OKC is a Picasso compared to last year’s opener versus an expansion side.

“If we can defend like that, and we can keep 11 players on the park and can create some chances, then things will look up for the Eddies,” said Miller.