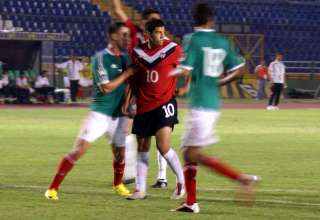 There would be no Cinderella story at the CONCACAF U-20 Championships.

Mexico, which easily won Group D, was expected to easily handle Canada, which struggled to beat minnows Guadeloupe and was thumped 3-0 by Costa Rica in Group C.

And, there were no shocks in the script. Mexico easily triumphed over Canada by a 3-0 scoreline. By making it to the semifinals, Mexico qualifies for the U-20 World Cup.The Canadian kids get their tickets home.

The Canadian team rarely threatened the Mexican goal, while El Tri’s U-20 corps got three wonder strikes. Mexico scored three times on wild, long shots, while, ironically, it missed a heck of a lot of close-in chances. But the scoreline was a fair reflection of Mexico’s dominance.

Diego De Buen, from Pumas UNAM, scored in the 72nd minute on a volley from outside the area, while Jorge Mora, who plays with Alvarez with Chivas Guadalajara, added insult to injury with a stoppage-time blast.

Really, though, the game was over when Alvarez struck. Just as we saw against Costa Rica, the Canadian U-20s rarely troubled the Mexican goal. Two goals against minnows Guadeloupe was all the offence Canada could muster during its abbreviated stay in Guatemala.