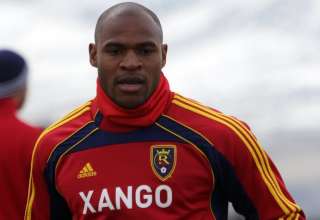 Jamison Olave is known as one of the meanest, toughest central defenders in Major League Soccer.

But the Real Salt Lake anchor guaranteed that his club would be the first MLS side to go to the CONCACAF Champions League final with a thumping volley off a scrambled corner kick to give RSL the precious road goal it needed to get by Costa Rican giants, Saprissa.

The final score read Saprissa 2, Real Salt Lake 1. But, carrying a 2-0 lead from the home leg of the semifinal, RSL put the tie out of reach when Olave struck in the second half to make the score 1-1.

Alonso Solis scored on an 87th minute penalty to give Saprissa the empty home win.

Even though Saprissa enjoyed much of the possession throughout the first half, it did little to trouble to RSL keeper Nick Rimando until the wonder strike to open up the second. Saprissa kept thumping speculative passes deep into RSL territory, but didn’t chase in numbers. RImando spent much of the half in catching practice — collecting long balls that overshot the attackers.

RSL, though, had two outstanding first-half chances to get that road goal that would have put the dagger through Saprissa’s hopes. Kyle Beckerman found himself alone in front of goal, but his shot was parried away by keeper Victor Bolivar. The Saprissa netminder came up huge again, diving to stop a header from Alvaro Saborio off a corner. If even one of those chances had found the back of the net, the sold-out throng in San Jose would have lost all hope of a comeback before the halftime whistle.

But the home crowd did get hope just 43 second into the second half. From 25 yards out, Luis Diego Cordero hit a swerving, left footed drive that a leaping Rimando couldn’t get to.

Like it did in its famous 5-4 loss to Cruz Azul in Mexico City during the group stage, Real Salt Lake showed that it was willing to attack on the road. Coach Jason Kreis remained committed to a 4-4-2, rather than pack the midfield to protect the lead.

RSL is a confident side. While it lost 5-4 in Mexico — in a massive rainstorm than flooded the field and transformed the turf into a quagmire — the team left the game feeling confident it could go into Mexico and become the first MLS team to get a win in CCL play. It will face either Monterrey or Cruz Azul in the final.

If it can pull off the final chapter of this great story, will RSL change MLS attitudes towards the CONCACAF Champions League? Will international success by RSL convince the managers of the MLS teams involved in 2011-12 — remember, RSL isn’t coming back to the next CCL — to do as coach Jason Kreis has done and start the best lineups available rather than use the games as exhibition matches for the reserves?

RSL is the first MLS club to give the CCL the respect that it deserves. The club had a mandate to treat it as a marquee competition. And it has been rewarded. A trip to the Club World Cup would be a deserved reward for a team that we may soon be comparing with the D.C. United squads of the late ‘90s as the best MLS has ever produced.