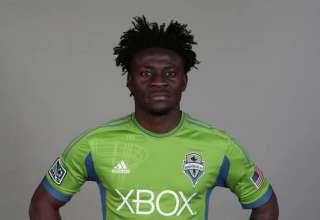 Seattle Sounders’ forward Obafemi Martins was named the MLS Player of the Week for his one-goal, one-assist effort in Friday’s 2-0 win over Real Salt Lake.

Martins got the most first-place votes from the membership of the North American Soccer Reporters.

He scored the opener in the third minute and then got the second assist on Lamar Neagle’s insurance goal. The win allowed Seattle to seize top spot in the MLS Western Conference, and first-place overall in the league. If MLS regular-season play ended today, Seattle would now be guaranteed home field advantage all the way to the Dec. 7 MLS Cup, if the Sounders make it that far. (Good thing the Seahawks are on the road that weekend)

How The 11 voted: Second assists to us are dubious at best. That probably comes from decades worth of watching second assists in hockey granted for things such as dump-ins. It’ll take a lot to convince us second assists are statistically noteworthy — or maybe we’re just old-fashioned.

Our vote went to Colorado’s Vicente Sanchez, who scored the equalizer and then made the cross that forced Matt Hedges’ own goal that allowed the Rapids to beat FC Dallas by a 2-1 count. The Rapids are the darkhorse team of MLS, sitting third in the West, but they get very little love. Kinda reminds you of 2010, when the Rapids went on to win MLS Cup in Toronto, doesn’t it?