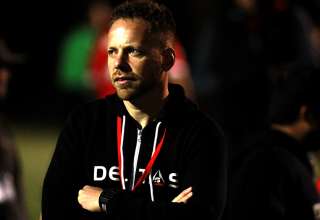 Marc Dos Santos, the Canadian head coach of the San Francisco Deltas, is already talking to agents and watching plenty of video as he looks to build a team to begin play in the 2017 NASL season.

I spoke with him Tuesday, prepping for an in-depth piece on MDS for Plastic Pitch‘s winter issue (no. 11, look for it in December-January). But there were some tidbits that really should get out there sooner rather than later.

Dos Santos said that the team has already signed players, including a Canadian, but the details of those deals have not been announced. The team is waiting for the right time to make those announcements, so he’s mum on the identities of the players signed.

“Yes, we already have a couple of players signed to contracts,” he said. “We’re waiting for the right moment to announce them. We have watched video, talked with agents, talked with players, we are looking at players who are free agents next season. We have to see what’s right for the mode of play we want to have in San Francisco.”

It’s no surprise that Dos Santos will look at Canadian players in San Francisco. When he coached the USL’s Swope Park Rangers in 2016, he had four Canadians on his roster, and three of them were regular starters — Tyler Pasher, Mark-Anthony Gonzalez and Amer Didic. In 2015, he led the Ottawa Fury to the NASL final and was very proud of the Canadian content on the team, from Julian de Guzman to Mauro Eustaquio to Carl Haworth.

It could very well be that it will be easier for American NASL and MLS teams to sign Canadian players for next season. The Canadian Soccer Association has indicated that a “solution” for the Canadian-player issue should be unveiled before MLS Cup. In NASL and MLS, Canadian and American players are considered domestics on Canadian teams, but Canadians take up international spots on U.S. teams. In USL, Canadians and Americans are domestics across the board. This disparity has long been a bone of contention for the CSA. But, if the coming solution means that Canadians will be domestics on all MLS and NASL teams next season, there would be no valued international roster spots lost if the Deltas sign a Canadian or two.

And, with Dos Santos leading Ottawa to the fall-season title in 2015, the question is how many former Fury players might end up in San Francisco.

“Of course, It is easier to work with the players you have worked with before,” said Dos Santos. “But it is also true that, after you work with one group in one city, you can’t repeat it the same way. Some players will be older, they will be slower. You can’t simply do a copy-paste of what we had in Ottawa. Coaching would be so easy if it was like that.”

Dos Santos won’t get the chance to face his former team in 2017, as the Fury have applied to leave NASL for the USL, a move that the Canadian Soccer Association is expected to approve in early December. The Tampa Bay Rowdies have also left the NASL for USL. The Fort Lauderdale Strikers need an owner, and the future of Rayo OKC is very much up in the air. NASL did make a positive step this week, confirming it has cut all ties with Traffic, the Brazilian super agency that had been embroiled in FIFA and CONCACAF bribery scandals. At one time, Traffic was heavily invested in the league.

Dos Santos said he tries to stay out of all the league politics. He has one job, to build a team.

Dos Santos said he hopes that the departures are a case of NASL needing to “take two steps back in 2017 so it can take five steps ahead in 2018.”