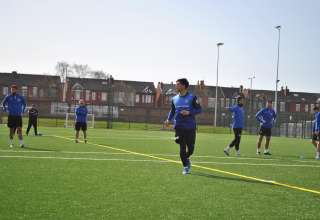 FC Edmonton coach Colin Miller spent some of Monday talking to the Scottish press about the importance of his club to the Canadian national side.

After all, three of his players — Nik Ledgerwood, Adam Straith and Ben Fisk — left the Eddies camp in Manchester, England on the weekend to join the Canadian national team in Scotland, as it prepares for a March 22 friendly there. And, defender Marko Aleksic has been summoned to join the Canadian U-23 team.

Meanwhile, the Eddies are set for the fourth match of their exhibition-game series in Manchester, England. The Eddies beat Wigan Athletic’s reserves 2-0, lost 2-1 to a Burnley side that featured a liberal dose of first-team players, then thrashed Newcastle United’s youth side, 5-1. The Eddies face Stoke City’s U-23 team on Tuesday.

Miller said he’s been very pleased at how the squad has gelled.

“It’s been terrific,” he said. “The improvement in the squad from day one of camp to now, it’s been fantastic.”

Miller said he feels he has an “excellent, attack-minded group.” He’s used Straith — usually thought of as a back-line player or a holding midfielder — in a more attacking midfield role, with good results. He said the players all know that playing for the team with the best defensive record in NASL carries responsibilities, but he’s seeing a lot more inventiveness in attack so far this preseason, which is needed for a team that scored just 25 times in 32 league games last season.

“Every player here knows they have to buy into the defensive mindset, especially when we don’t have the ball,” said Miller. “But there’s a greater sense of freedom on the ball when we have it in attack.”