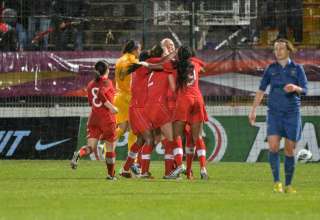 The Canadian national women’s team is beginning to get a knack for stunning the French with late goals.

In 2012, it was Diana Matheson’s late shocker in the Olympic bronze medal match that gave Canada a 1-0 win over the French. Even though the stakes weren’t nearly as high on Thursday, this time it was Kaylyn Kyle’s turn to play the hero. Her last-gasp injury-time goal gave Canada a 1-1 tie in a friendly in front of 5,783 fans in Nice, France.

Elodie Thomis gave the French a 1-0 lead before halftime. It should have been more, but Louise Necib’s 20th-minute effort struck the bar. Just as in London in 2012, the French likely deserved a better fate, but in the end had to look at themselves for not converting their chances.

Keeper Erin McLeod was named Canada’s player of the match, and she was also singled out in the French Football Federation’s website for her play. Thomis should have had more, and Gaetane Thiney should have converted a chance on a two-on-one.

The game was played in the rain, and that also contributed to the French missing their chances in front of goal.

Kyle came in as a sub for Sophie Schmidt and scored the late equalizer while France was down to 10 players. The French had a player off for treatment.

Last year, when Canada beat France in the bronze-medal match, coach John Herdman admitted that luck had a big role in the result. He said it was as if Canada had a force field around its goal. By now, the French must be wondering if there is some large karmic force at work.