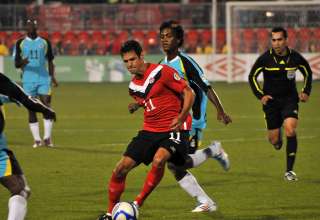 The Canadian scored for the Swiss side’s first team as it played a friendly against a mix of the club’s youth players.

But, when it comes to senior matches, Simpson has been curiously absent since signing with the Swiss side during the January transfer window. Since his signing, BSC has played three friendlies —— against Dinamo Kyiv, Ekranas and Dinamo Tiflis — and one league match (a win this pas weekend over Servette), and Simpson hasn’t featured in any of them. And, this week, Simpson’s lack of playing time has become a source of debate among BSC fans on their message boards.

It’s dangerous for a journalist to jump to conclusions. So we won’t do that here. But, The 11 has made attempts to contact both BSC and Simpson’s agent to ask about the player’s status. We haven’t heard back. And, when we asked the Canadian Soccer Association if it has any news about a regular member of our national team’s starting XI, it had no update.

Other than a few dashes on the team’s statistics sheet to show that Simpson has yet to see game action, there has been little mention of the Canadian since he arrived in Switzerland in mid-January.

During the transfer window, Simpson and his agent walked away from Turkish Manisaspor, claiming they had FIFA support. Simpson cited unpaid wages as the reason he could leave the Turkish side.

In fact, Simpson’s agent revealed to The 11 (see link below) just before the transfer that he and his client had begun the action against Manisapor over unpaid wages in August. The FIFA file on the case dated back to the summer. But, it took months for the situation to come to a conclusion.

So, during Canada’s last phase of World Cup qualifying matches, Simpson was playing with all of this hanging over his head.

But, when Simpson left Manisaspor, the Turkish club promised it would take action to block any move the B.C. native tried to make. And we are continuing to ask if that’s the case, or if Simpson has begun at the bottom of the team’s depth chart. Of course, the latter is hard to believe, as Simpson performed very well in the Turkish League and was an automatic starter from week to week.

Of course, the fact that Simpson isn’t playing is bad news for the Canadian national team. Yes, we are still months away from Canada’s next World Cup qualifier, but Simpson getting no first-team time — heck, no second- or third-team time, either — is bad for our national program. And, of course, if he doesn’t play, it throws his participation in Canada’s Feb. 29 friendly against Armenia into question.