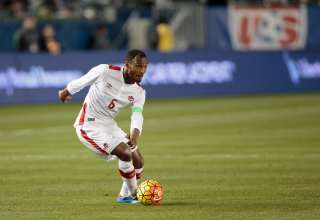 When you’ve covered sports for a long time, you get awfully used to players and coaches downplaying their games. They say that “it’s just another game.” They don’t want to say anything that the opposition coach can tape up on the dressing-room whiteboard.

But Julian de Guzman didn’t do that. In fact, he ramped up the hyperbole ahead of next Friday’s World Cup qualifier against Mexico.

“This one game at home could change the future of Canadian soccer, it could change careers,” de Guzman said Friday in a media conference call.

If Canada can get something out of the Good Friday match against the Mexicans, this country can start thinking about making it to the hex — the final round of CONCACAF qualifying. And, for de Guzman, who will be honoured before Friday’s game for becoming the most-capped player in Canadian men’s team history, the run-up to this game, well, it feels different.

Want more of his thoughts?

“It could change the direction of Canadian football.”

“It’s of great importance for the future of Canadian soccer. This is our opportunity for ourselves to prove our worth.”

Why is it so important? It’s not just about Canada getting to Russia. It’s about Canada earning respect on the international stage. JDG says that, right now, it’s harder than ever for Canadians to find work at European clubs, because the country’s stature as a soccer nation has fallen so, so far. There are five pro teams in Canada — but even if they carried all-Canadian rosters (which they don’t come close to doing) they still don’t provide the number of professional places to give our player pool the competitive first-team minutes it needs.

“It’s pretty obvious that Canada needs its own league,” he says.

And for young Canadians to get chances at La Liga or Bundesliga clubs — like de Guzman did — Canada needs to get better. And that’s why a result against Mexico is the kind of thing that could change the destinies of some of our players. The Canadian player who looks for a trial at a bigger club will have a better chance of snagging that invite if Canadashows it can be competitive with Mexico. And that’s what de Guzman is stressing when he says Canada-Mexico could change careers.

He’s absolutely right. And he added that the lack of opportunities for Canadians “has a lot to do with how the national team has presented itself in the past. That’s about to change.”

That’s confidence. That’s belief. There’s no doubt that there’s a change in the Canadian camp’s atmosphere. Now that Burnley’s Scott Arfield has been named to the roster, that’s yet another one Coach Benito Floro has been able to repatriate, joining Junior Hoilett and Steven Vitoria. De Guzman said that the team is healthy, and that this is a first-choice squad with no reason to make excuses. (For those bent out of joint by the lack of Whitecaps, Impact and Toronto FC players chosen, this might come off as a cruel truth. Sorry.)

And for de Guzman, who used to be a ball boy for Canada games in sparse crowds at Toronto’s Varsity Stadium, knowing that 46,000 tickets have already been sold for Friday’s game — well it “brings goosebumps.”

De Guzman is one of three NASL players to be called into the side — joining Ottawa Fury teammate Marcel de Jong and FC Edmonton’s Nik Ledgerwood. To be fair, Ledgerwood and de Jong just joined their respective clubs and haven’t played in official NASL matches yet. De Guzman said that the reason all three are with the national team is because they have long historties with Floro; they they “understand Benito’s ideas and tactical views,” But he added that Canadian national-teamers moving to NASL “could open doors for Canadians looking to find themselves” and wanting to move on to professional soccer careers.

The Canadian MLS teams only sent one player to the national side, Toronto FC’s Will Johnson. The Whitecaps and Impact were shut out. In total, MLS sent just four players to the Canadian national side. For a league that consistently talks about how important it is for the Canadian team to have success, to only have four players called in for a game as big as Mexico is, frankly, an embarrassment. We can argue all day about why Jonathan Osorio or Kianz Froese or Wandrille Lefevre didn’t get called; but the fact is that, nearly 10 years after a Toronto FC player first kicked a ball in MLS, the league isn’t providing a pipeline of players to our national team.