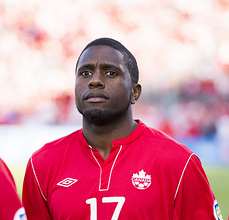 Olivier Occean: Not available for selection

Canadian national-team coach Stephen Hart got the result he wanted in Friday’s 1-0 win over Panama, but will be forced to shuffle his deck ahead of Tuesday’s World Cup qualifying rematch in Panama City.

With Will Johnson out because of yellow-card accumulation and striker Olivier Occean not even making the trip to Central America because of an injury picked up in Friday’s win, Hart will have to make some changes.

“It was best to send (Olivier) back to his club (Eintracht Frankfurt),” said Hart in a conference call with media on Monday. “We have make some changes to the lineup. We trained today and players know what their roles are.”

As for who will replace Occean up top, Hart said he has three options; to move Dwayne De Rosario from midfield to striker, to move Simeon Jackson to the top of the attack, or  allow speedster Tosaint Ricketts to start the match.

Getting to training wasn’t easy. Hart said the team’s bus was regularly blocked by vehicles whose drivers parked in the streets, intentionally blocking their path to Estadio Rommel Fernandez. Overnight, revelers danced in the streets, banged drums and shot fireworks into the air — just to keep the Canadian players from getting a proper night’s
rest at their hotel.

Such is the nature of playing matches in Central America, where hospitality goes out the window when three vital World Cup qualifying points are on the line. And Hart’s lineup is laden with veterans, so he expects the team to laugh these off as minor annoyances — they have been through this before.

Panama can retake the top spot from Canada in the qualifying group with a win. If Canada can steal three points in Panama City, it will be four points ahead of Panama with two matches left — and one of them is home to Cuba.

But, while Canada’s personnel will change, the game plan won’t.

“I would like to continue to us ball possession to take away some of their athleticism,” said Hart.

And that means he expects Panama to try and come hard out of the gates, to try and score early to fuel the fans and keep Canada on the back foot.

As for the pitch itself, Hart said it was in excellent shape. It drizzled today in Panama City, and the moisture made it play “extremely quick,” said Hart. If it rains at all on the day of the match, it should play very fast.

And, Hart reported that an appeal to FIFA has been successful; Julian de Guzman was mistakenly given a yellow card on Friday for a foul that was committed by Simeon Jackson. That has been corrected, and it is now Jackson who carries the yellow. That’s a break for Canada because, as the holding midfielder, De Guzman is more likely to pikc up cards than Jackson on Tuesday.