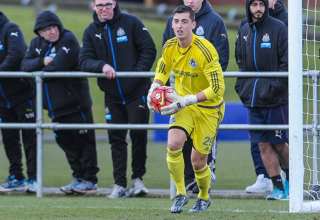 There were some hints dropped Friday that suggest that the loan of Canadian keeper Nathan Ingham from FC Edmonton to TFCII could be the beginning of something greater.

Ingham, who was signed by the Eddies at the start of 2016, became part of a goalkeeping logjam as Matt VanOekel established himself as the top keeper in NASL. FC Edmonton has the best goals-against mark in the league. Ingham, who was behind MVO and Tyson Farago on the goalkeeping depth chart, needed a place to play.

On Friday, the move was made to loan out Ingham, who was named the MVP of 2015 PDL championship weekend, where he backstopped Kitchener-Waterloo to the league title. He made a conscious decision to avoid the MLS combine process to take FC Edmonton’s contract offer.

But Eddies coach Colin Miller said a few interesting things about the loan.

“I think it’s a compliment that a Major League Soccer (MLS) club is coming and looking to take one of our players on loan and possibly more if we can build a strong relationship,” he said in the release issued by the club.

“Nathan’s loan shows that we are doing the right thing at the club and shows the quality of the players that we have,” Miller added. “It also shows that we are a good place for an MLS player to come on loan or for one of our younger players to go help fill out a USL roster.”

Does this signify that the Ingham deal could signal that FC Edmonton is establishing closer ties with Toronto FC? In the past, the Eddies have taken players from the much-more-geographically convenient Vancouver Whitecaps on loan — Corey Hertzog, Carlyle Mitchell come to mind. But the Whitecaps and Eddies haven’t had any loan dealings of late — and, the Whitecaps actively look for players in Edmonton that they can sign directly; Alphonso Davies is the most obvious example.

It will be interesting to see if the Ingham deal is indeed a sign of closer ties between the Reds and the Eddies.