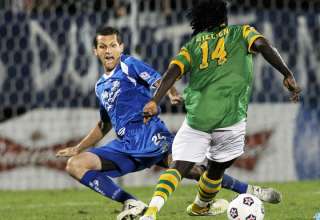 On Thursday, the team announced that five players eligible under the Can-con rule — and who played with the team in its final NASL season — will go to camp in Guadalajara, Mexico with the club. Eddy Sebrango, Simon Gatti, Mircea Ilcu, Nevio Pizzolitto and Reda Agourram will all get the chance to make the MLS club.

Many of these names will tug at the heartstrings. And that may be the most important thing for an Impact team that needs to find an identity. So far, of 21 players signed, only Greg Sutton has a Canadian passport. As it stands, Montreal’s season opener in Vancouver could be a game without Canadian players.

Sebrango has his Canadian citizenship, even though he represented Cuba at the senior men’s level. The 38-year-old veteran came out of retirement last season and scored six times, including his 100th all-time goal at the Div.-2 level.

Agourram is a 21-year-old forward who has scored just twice in two seasons for the senior team, but youth is on his side.

Ilcu came up from the U-21 ranks and made four starts for the Impact in 2011. Like Agourram, he has youth on his side.

Gatti, at 30, was still a key contributor in 2011. He led the team in games and minutes played. Other NASL offers are said to be on the table for Gatti if he doesn’t make the Impact.

But, if any of these five make the team, would any stand a serious shot at getting MLS game time, or would they be off to the reserve league? Sutton will likely start the year as the No. 3 keeper on the depth chart. Will signing two more Canadians be token gestures? Another Canadian team with a set-up like Vancouver — regularly starting zero Canadian players in the starting XI — would be disappointing.

The team also announced that goalkeeper Bill Gaudette, midfielders Leonardo Di Lorenzo and Amir Lowery, as well as forward Mignane Diouf, will not return with the club in 2012.

Diouf was charged with shoplifting in a Minnesota airport during a road trip last season. Lowery, in a season-ending interview with The 11’s Mike Wyman, had expressed his desire to stick with the club.

“Unfortunately it’s not in my hands so it’ll be a matter of seeing what direction they want to take the team in and whether I fit in with their plans,” he said.
“It’ll depend what happens after I sit down with the staff and figure out what’s going to happen with the team. If I have to look elsewhere I guess that’ll be what I have to start to do. If I can stick around for next year then I may stay a little longer and just relax a bit.”