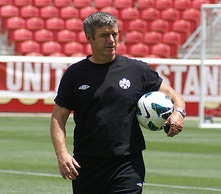 Andres Fresenga and Frank Jonke will be available for Tuesday’s Canadian men’s national team friendly in Houston against the United States, but keeper Lars Hirschfeld has been forced to head back to Norway as his back problems continue.

Hirschfeld left at halftime of Canada’s 4-0 loss to Denmark Saturday, and had been dealing with back spasms all week.

That means either unattached Simon Thomas, who played the second half of that loss to Denmark, or Genoa’s Roberto Stillo, will go in to what interim coach Colin Miller called “the lions’ den” at BBVA Compass Stadium.

“I have no concern with who will play in goal tomorrow night,” said Miller.

And he lauded Thomas’s work — as he had to come in with Canada already down 3-0 to the Danes. For an unattached player “to come from the wilderness” and play in an international match, under thost trying circumstances, was a credit to Thomas.

“We have to get these young guys in,” said Miller. “It’s sink or swim.”

Thomas obviously did more to impress Miller than forward Kyle Porter, who came in during the second half of the Denmark match. Porter spent the last two seasons at FC Edmonton, and has yet to respond to the club’s contract offer for 2013. Miller is FC Edmonton’s new coach. Despite the delicate nature of their club relationship, Miller was blunt in his assessment of Porter’s work.

“With Kyle, I think he has a ways to go, to be honest. He did some OK things, but he has some ways to go at this level of football.”

“That level of desire and passion, I need to see more of it,” said Miller. “He’s got to show real passion for this game.”

But Fresenga will give Miller another option at fullback and Jonke can help bolster the attack. Neither have been able to train much over the last week, but both were cleared to play on Monday.

“Frank’s ankle was the size of the balloon at one point,” said Miller.