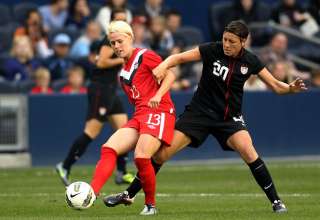 That’s the verdict after the John Herdman era commenced Saturday night. The new coach of the Canadian women’s program got a good result, a 1-1 draw with the World Cup runner-up United States in Kansas City.

With mainstays Christine Sinclair and Candace Chapman sitting out this two-game friendly set with the Americans as they rest and recharge after a grueling WPS and international season, Herdman had the option to give several international debuts to the women on his roster. But the only debutante to make Canada’s starting XI was the American-born Atlanta Beat defender, Lauren Sesselman.

University of Victoria defender Jaclyn Sawicki made her debut in the dying seconds of the match.

But, outside of those two premieres, the lineup featured a lot of familiar faces from Carolina Morace’s regular squads.

Instead of throwing youth to the wolves in his first match, Herdman relied on his vets. And Canadian fans will be curious to see if he’s more inclined to give more young players some time on the pitch when Canada faces the U.S. again Thursday in Portland, Ore.

U.S. star Abby Wambach got the opener on a penalty after Canadian defende Emily Zurrer was ruled to have blocked a shot with her arm. Wambach, who has taken over as the face of women’s soccer in the U.S., thrilled the home crowd with a goal.

But Melissa Tancredi equalized for Canada before halftime. Kelly Parker played a wonderful through ball for Tancredi to get to, and the veteran made no mistake, beating U.S. goalie Hope Solo with the 14th goal of her international career.

If there was a standout in the second half, the nod would go to Canadian keeper Erin McLeod, who did well to deny Alex Morgan, the young teammate of Sinclair’s with the Western New York Flash. Morgan had a couple of decent chances, but McLeod did well to limit the U.S. to just the one spot-kick goal.