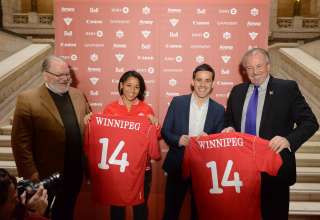 When the deal was made to transfer national-team midfielder Desiree Scott from FC Kansas City of the NWSL to Notts County, the Canadian Soccer Association made the decision not to replace her spot in the American pro league.

So, this year, the Canadian Soccer Association will foot the bill for 15 players rather than the previously-agreed-to 16.

In a conference call with Canadian media ahead of the Cyprus Cup, national women’s team coach John Herdman said that Scott’s decision to make the move to England caught him by surprise. And, then he made a rather frank assessment: He didn’t feel that Canada had another free agent who would merit the 16th spot.

“At this stage, we don’t have that depth of talent. My commitment is to put the best Canadian players in that league, and I can’t make that commitment at this point.”

Yes, there are some very talented players in the Canadian system, but some are under contracts in Europe, and others are still NCAA eligible and aren’t ready to make the jump to the professional ranks.

But Herdman’s comments are especially frank and biting when you look at Canada’s roster for the Cyprus Cup, which sees Big Red taking on the Finns in their March 5 group-stage opener. Canada’s group also includes England and Italy. Defender Rhian Wilkinson, who was with the Boston Breakers last season, is now listed as unattached, and wasn’t allocated this season (note: It was Wilkinson’s decision to pull herself out of the NWSL player poll). Veteran Brittany Baxter (née Timko) is unattached. And CIS and W-League product Josee Belanger is without a contract. That’s three players who are free agents, and yet Canada is now set to go into the NWSL season one under its limit of 16 allocations.

But, if a player isn’t good enough to be a regular starter in NWSL, the question is: Would it be worth it to put the CSA dough forward so she at least trains with an NWSL side? Or is it a dangerous way to spend money, and the CSA is better served to keep the dough from going to a player who wouldn’t see playing time?

Herdman said that, when he made the decision last September to re-allocated Scott, he had no idea she wanted to move away from NWSL. The news came out in 2014 that she wanted to make the move, which turned into a drawn-out process with both NWSL and Notts County claiming her rights.

“It came as a bit of a surprise… No one expected it,” said Herdman. But the coach added that he had “no problem” blessing Scott’s move from the U.S. to England.

Scott’s Notts County side kicks off its regular season April 16 with a date against the most dominant side in all of English women’s football, Arsenal.