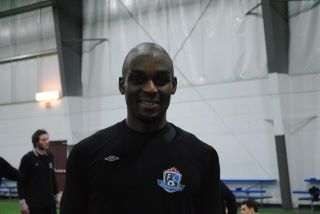 Hatchi’s recommendation has brought his French compatriot, Jonathan Joseph-Augustin, to Edmonton on a two-week trial.

From 2003 to 2004, Hatchi and Joseph-Augustin were teammates at French second division side, Grenoble.

Hatchi signed with FC Edmonton earlier this season after being released by the Montreal Impact in 2011. Joseph-Augustin, 30, is six-feet-tall defender who has played French first division football with Guingamp and also played three seasons with Belgian side Beveren, where he was the captain.

He has most recently played in the lower divisions of German league football.

Joseph-Augustin is a former member of the French U-20 squad, but has never received a senior cap for Les Bleus. He’s a left back who can also play in the middle.

FC Edmonton director of soccer Joe Petrone has made it no secret that shoring up the left side of defence is the biggest off-season challenge for the Eddies.