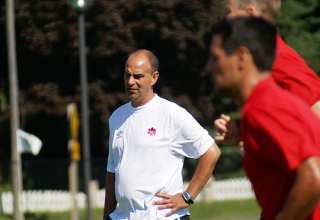 Hart confirmed in a conference call Thursday that “yes, we have been looking at other venues” when it comes to hosting Canada games. And he confirmed that Moncton, N.B. is one of the sites being considered.

Earlier this week, Canadian Soccer Association vice-president Victor Montagliani said that Hart would be given more power to choose what venues Canada would call their home fields for upcoming World Cup qualifying rounds — assuming, of course that Canada makes it out of this first round. The thinking is that Canada would do more to select venues that give them a greater home field advantage — weather, support — in order to be more ruthless about qualifying.

Canada is playing all of its first-round games at BMO Field, and drew a healthy partisan crowd of 11,000 for the minnows, St. Lucia, in their WCQ opener. Canada will host Puerto Rico on Oct. 11. Really, the CSA had no choice but Toronto — when playing three minnows that don’t have a lot of marquee value, having the games in the same venue allowed for tickets to be sold in packages. And, because of renovations, venues in Vancouver or Montreal wouldn’t have been available for all three home games.

But Hart made it clear that convenience was a major priority for him — as in, picking a venue where it’s most convenient for players to fly in from Europe and then be returned to their clubs as quickly and comfortably as possible.

He said he wants to ensure “that it is convenient for us to qualify.”