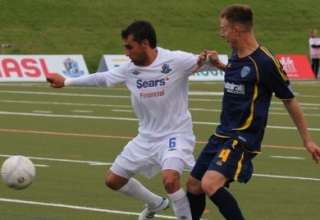 Saiko, who led his hometown FC Edmonton in scoring, was the only member of the Eddies to make the team, though defender Paul Hamilton was nominated.

The Montreal Impact put one player on the all-star team, that being defender Hassoun Camara.

And that’s where things get, well, bizarre. Earlier this week, Impact keeper Evan Bush won the Golden Glove award for having the best season of any keeper in NASL. He allowed only 14 goals in 19 games and is sure to be one of the players that Montreal tries to retain as it makes the move to MLS next season. Montreal signed veteran Bill Gaudette at the start of the season but, after the former Puerto Rico netminder got hurt in a match in his old haunt, Bush took over and established himself as the best goalie in NASL.

Yes, despite winning the Golden Glove, Bush didn’t make it onto the Best XI; that honour went to Carolina keeper Brad Knighton.

Weird. Yes, part of the reason that leagues do these lists is to give fans something to argue about — and Bush (and Hamilton, too) have every reason to feel slighted. The team was selected by the coaches of the eight NASL teams.

As for Saiko, he was thrilled to hear news of his award.

“Obviously, it’s an award that recognizes individual achievement, but I am a player who puts the work in to try to help my team. It’s nice that people recognized that.”