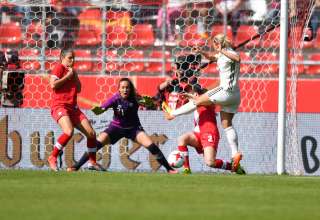 Linda Dallman scored late to give Germany a 2-1 win over the Canadian women’s national team Sunday in Erfurt. But that’s not going to be the main talking point of this game between world no. 5-ranked Canada and the top-ranked Germans.

No, unfortunately that honour goes to Canadian keeper Kailen Sheridan, who gifted the hosts the opening goal. It was bad enough of a mistake that Canada Soccer didn’t include it in its official YouTube capsule package of the game — the highlights begin with Canada down 1-0. Now, it should be noted that there were WiFi problems at the stadium — so there could be some explanation for the way the highlights were edited.

But what you won’t see is Sheridan mishitting a backpass with her left foot, and ball rolling past her and into the net. For sure, it’s an embarrassing own goal — but keepers have to be the most mentally tough players on the pitch and, in some bizarre way, we can argue that giving up a goal like that in a friendly will actually be good for Sheridan down the road; that it will only force her to understand that you’ve got to forget the bad goals and remain in the moment.

(As an aside, it should be mentioned that omitting an embarrassing own goal only cements the rather outdated notion that women’s sports should be covered differently than men’s sports.)

And, it needs to be said Sheridan wasn’t the only goalkeeping culprit on the day. Canada equalized thanks to Deanne Rose’s finish of a Janine Beckie cross. At halftime, Stephanie Labbe came in for Sheridan.

It was Labbe’s poor punch of a German corner kick that led to Dallman’s winner. She pushed it right out to the top of the penalty area, basically teeing up the ball for the German match-winner.